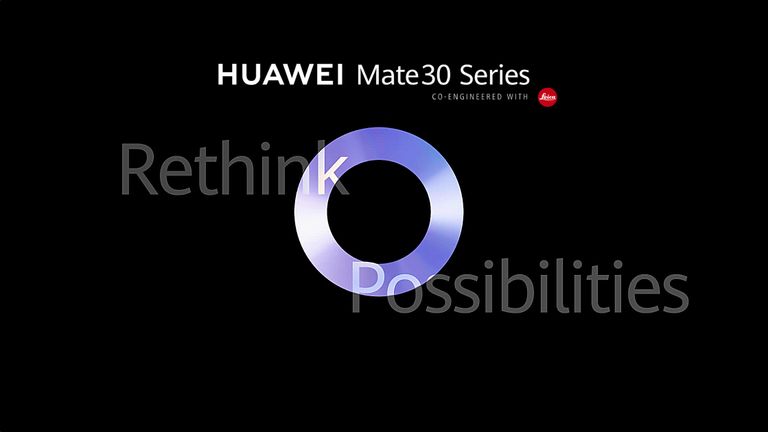 Huawei Mate 30 and Huawei Mate 30 Pro will finally be unveiled on September 19, 2019 at an exclusive event in Munich, Germany. The Shenzhen-based company confirmed the hotly-anticipated event in a tweet at the weekend.

The multi-national company announced the event with a mysterious tweet stating: "We're going full circle in Munich on 19.09.2019." The Mate 30 series event is being promoted with the social hashtag #RethinkPossibilities.

The next few weeks are set to be packed with huge announcements. The IFA 2019 consumer technology tradeshow kicks off later this week with the likes of Samsung, Fitbit, Harman Kardon, Garmin, and more, in attendance.

Apple will unveil its new iPhone, Apple Watch Series 5, possibly a new pair of AirPods, and a Tile-like tracker, on Tuesday September 10, 2019.

And then Huawei will reveal the successor to the Mate 20 and Mate 20 Pro the following week, on Thursday September 19, 2019.

Did you get it right? The countdown to #HuaweiMate30 starts now!We're going full circle in Munich on 19.09.2019.Join us live: https://t.co/9ugi5gG9ci#RethinkPossibilities pic.twitter.com/etRYjrBVECSeptember 1, 2019

What about the circle motif on the invite? Well, this one isn't quite as cryptic as Huawei might think as the new Mate 30 series is heavily rumoured to ship with an all-new circular camera system on the rear panel.

That replaces the square-shape camera set-up that characterised the Mate 20 series, where each of the three camera lens occupied a corner of the square with the LED flash making up the fourth. However, with this exact design now mooted for both the iPhone 11, iPhone 11 Pro, and the upcoming Google Pixel 4 and Pixel 4 XL, it makes sense for Huawei to try something completely new again.

The circular array on the Huawei Mate 30 and Mate 30 Pro are widely-tipped to boast a healthy helping of 40MP cameras capable of aping what we've already seen from the Huawei P30 Pro, which was capable of 5x lossless optical zoom, 10x AI-enhanced lossless hybrid zoom, and up to 50x digital zoom. It also has artificial bokeh-style blur for portrait shots on the front and rear cameras.

Elsewhere, we expect the new flagship series from Huawei to arrive with a dangerously-fast Kirin processor, likely dubbed Kirin 990, that will be able to stand toe-to-toe with the best from Apple's R&D department, and more than likely leave the rival Qualcomm Snapdragon 855 in the dust.

Some tipsters claim Huawei will fit its Mate 30 series with a OnePlus 7 Pro-matching 90Hz screen to provide smoother system animations and transitions.

One detail that's still unknown is what operating system will be running on the Huawei Mate 30 and Mate 30 Pro when they ship next month. Google has warned that the new flagship handsets will not be able to run Android 10 – previously known as Android Q – because of the ongoing trade disputes with the United States.

Google-built apps, like Gmail, YouTube, Google Calendar, and Hangouts, will not be preinstalled on the smartphones. Worse yet, the Huawei Mate 30 series will be unable to access the Google Play Store, meaning third-party applications like SnapChat, Facebook, Spotify, Apple Music, Hive, and more, will be missing too.

The US government restricted US firms from selling products and services to Huawei back in May over national security concerns. President Trump has previously stated that some exemptions would be allowed in the current US trade ban. However, US officials have yet to grant any licences to trade with Huawei.

Existing hardware, like the Huawei P30 and P30 Pro launched earlier this year, can continue to run Google-made apps and are already confirmed to get Android 10.