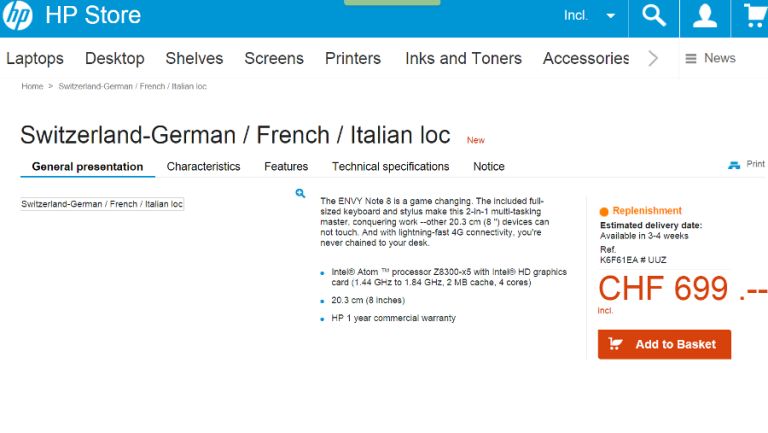 A new 8-inch Windows 10 tablet from HP, the Envy 8 Note (5000), has had its details and specification leaked online, along with a rather weighty price tag.

The Envy 8 Note was spotted when Tablet Monkeys dug through some FCC files. The slate is apparently a “game-changer” according to its page on the Swiss HP store (which can still be viewed via its Google cache, as of course it was yanked down pretty swiftly).

This Envy 8 is a 2-in-1 hybrid which comes with a full-size (10-inch) keyboard with trackpad to turn it into a laptop, and a stylus as well. The latter is the HP Active Pen which apparently offers a “natural pen and paper feel” for the user, and there are bundled apps for organising your note-taking such as HP Instant Note.

As for the core specs of the Envy 8 Note, it's powered by a Intel Atom x5-8300 CPU, a Cherry Trail model running at a base clock speed of 1.44GHz, with up to 64GB storage and a microSD slot for expansion.

There's also a 5 megapixel rear camera with autofocus which HP claims boasts a “high-quality sensor” that performs well enough in lowlight conditions (we shall see, as most tablet cameras aren't up to much).

4G connectivity is on board, along with the usual array of sensors, and the tablet weighs 430g, with the keyboard being slightly heavier at 550g.

The keyboard folio can be used as a tablet holder to protect the slate when on the move, and also acts as a purpose-built stand, Surface-style.

As for that price – according to the Swiss HP site, the device will retail for 699 Swiss Francs, which works out at around £465, so this certainly isn't a budget affair.

Of course, there's no guarantee of the accuracy of that price, but judging from the billing this tablet is getting (game-changer and all) and what we know of the spec, this will very likely be positioned as a premium product.

Also check out: Toshiba Satellite Click 10 kicks off US pre-orders