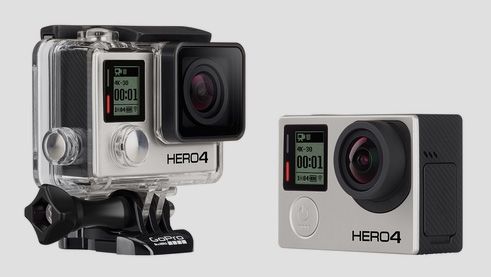 It's been a long wait but it's finally here - say hello to GoPro's new Hero4 range...

GoPro Inc has launched its next-in-line product for action cam shooting - the Hero4.

The firm reckons its latest snapper delives '2x the performance' of its predecssor, and can capture 4K footage at 30 frames per second.

It's also good for 2.7K video recording at a more nippy 50fps, with the more standard 1080p HD fare measuring in at an impressive 120fps.

The sound system has also been 'entirely redesigned', offering up double the dynamic range of previous models, as well as promising the high-fidelity sound capture.

"For the past twelve years, our apssion has been to make it easy for people to self-capture jaw dropping, professional quality footage of themselves engaged in their favourite activities," says Nicholas Woodman, GoPro's founder and CEO.

"That passion led us to embark on our most ambitious design and engineering effort ever, and the result is nothing short of the ultimate GoPro - the Hero4 Black. We can't wait to see what the world captures with it."

Aside from the beefy video specs, you'll also be able to extract 8.3MP stills from footge, and take 12MP photos at 30 snaps-per-second burst speed.

"A common pain-point is deciding between capturing video or photos of an experience," says Woodman, explaining the photo extraction process.

"Each frame of 4K30 video is similar to an 8.3 megapixel photo. It's one of the many wild capabilities of this impressive new device."

The new device will ship in black ($499), offering the full-fat video recording, and silver ($399), touting slightly toned down specs.

GoPro says the on-sale date for both cameras is the 5th October, available from the firm's website and select retailers globally.