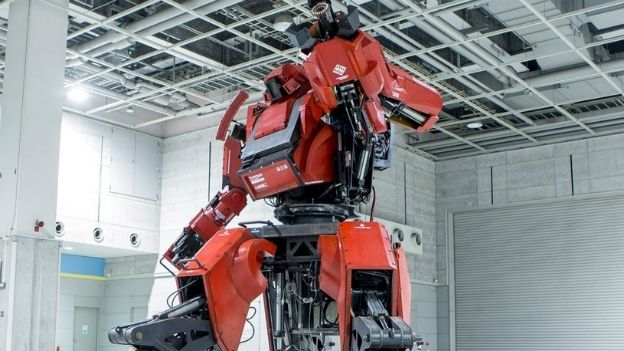 Anime fanboys and gaming geeks who dream of Pacific Rim-esque battle scenes, this one is for you. Created by Suidobashi Heavy Industries, the Kuratas mech suit is a 13-foot-tall, 4.4-ton robotic suit that's operated by a pilot inside the cockpit.

Designed back in 2012 by artist Kogoro Kurata and crafted by robotics expert Wataru Yoshizaki, the Japanese invention has made its way onto Amazon Japan with an eye-watering price tag.

Any well-funded evil geniuses can get hold of one for ¥120,000,000, which works out to a casual $1 million. This 'starter kit' is arms-sold-separately, so unfortunately you'll have to pick up the weaponry elsewhere.

The Kuratas mech suit rolls around on a tripod system with wheels on the end of each leg, maxing out to reach a top speed of 6mph.

Although what it loses it speed, it gains it firepower. The real-life comic book creation packs twin gatling guns that can shoot 6000 BBs per minute as well as a launcher that shoots water bottles.

If you don't fancy jumping in the cockpit and controlling the suit manually, then you can use a remote control to operate it from the outside.

It may come as no surprise that the Amazon listing clearly states that 'safety and comfort' are not guaranteed, but we doubt anyone that seriously buys this is looking for a 'safe' experience.

Check out how to pilot the Kuratas in the tutorial video below.