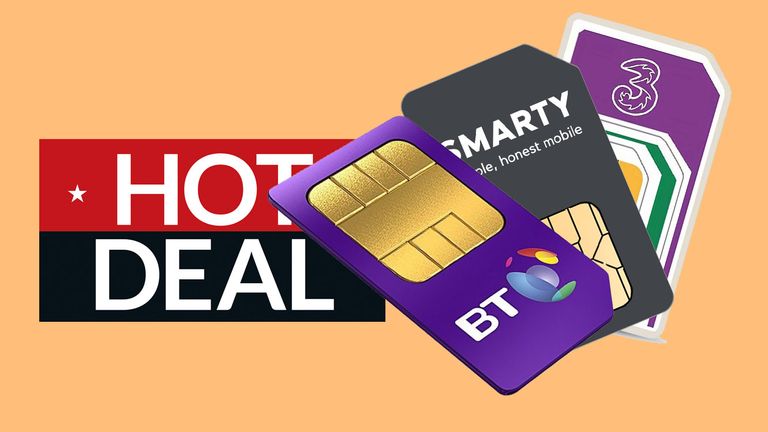 SIM only buyers are among the savviest shoppers around: it's easy to be tempted with the latest and greatest handsets, but many phone contracts often stiff you well above what the phone is worth.

If you already have a perfectly functional handset and you're not worried about getting the latest tech, you can get an amazing data package for comparatively very little money.

Want to check out just how much you can save? Browse these deals from some of the UK's best providers and see for yourself. If your original contract is running out, consider sticking with your current handset and saving yourself a sizeable amount of money each and every month.

Three SIM-only deal with 12 month contract | Unlimited data , calls and texts | £18 a month
This is among the best mobile deals on the planet. Unlimited everything from Three, including 5G-ready access at no extra cost and your own personal WiFi hotspot, again at no extra cost. All for just £18 a month? Have Three gone mad? We're not sure, but you'd better grab it quick in case they have a change of heart. View Deal

BT Mobile 12 months SIM-only deal with JBL headphones | 15GB data, unlimited calls and texts | £15 per month (£20 for non-BT users)
With free BT Sport on mobile in addition to 15GB data, unlimited calls, texts and a free set of JBL headphones. this great deal from BT Mobile is well-suited for those who don't game on mobile and just need ample data to browse Facebook, Instagram, Twitter or Reddit. At an already-excellent £20, existing BT customers can snag this deal for just £15, an absolute steal. View Deal

ID Mobile SIM-only monthly contract | 1GB data, unlimited minutes and texts | £5 per month
Proof that contracts don't have to cost the earth. You get 1GB of data, enough for sporadic smartphone users, unlimite minutes, calls and texts for a VERY wallet-friendly £5, an absolute steal. One of the cheapest phone contracts on the market right now. View Deal

Good, right? For more amazing SIM card and phone deals, make sure you check out the best SIM only deals on the market, the best phone deals right now, the best cheap phones you can pick up, and many more.