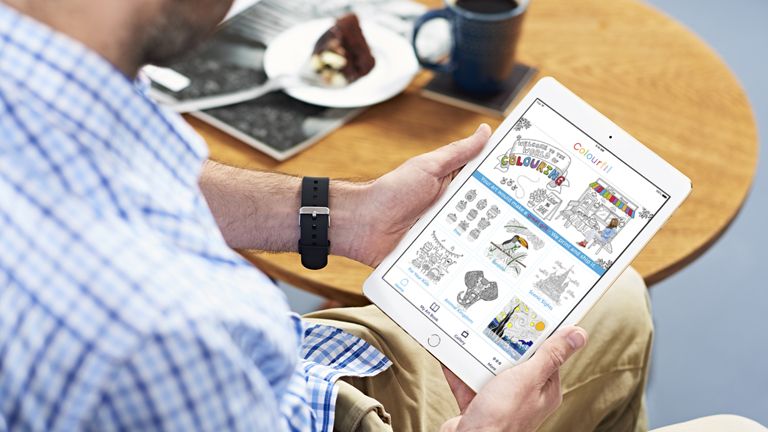 If you fancy yourself as an artist but are more cack-handed than Constable, there are a multitude of apps and gadgets to help you become a digital da Vinci.

The best news is that minimal investment is needed to see whether you have artistic flare, with apps offering tutorials and tools costing less than a pack of pelt pens.

And for get paintbrushes. Smart styluses can read your pressure to give you the perfect on-screen brush stroke, colour in any shade you can think of, or even turn a sketch into a sculpture.

School art lessons may have involved sketching progressively mouldy apples or your spotty mate, but now you can learn to draw afresh with the help of uber-cool Star Wars illustrator Mark Busch and his Interactive Sketchbook app.

The iOS app allows users to sketch their own ideas or follow Mark's lead as he teaches professional techniques in a series of tutorials. Like Photoshop, it uses layers so artists don't have to start again if they make a mistake, while a 'side by side' mode lets them reference a photo and tutorial on one side of their iPad while sketching on the other.

It's also possible to trace images, use an Apple Pencil or another clever stylus and best of all, you'll never run out of pages in the sketchbook, with the ability to save and share masterpieces.

If you have ever dreamt you could make a drawing a reality, the 3Doodler Create pen can do just that – well, almost. The latest generation 'world's first 3D printing pen' allows users to draw in 3D because instead of ink, it extrudes heated plastic that cools almost instantly into a solid, stable structure. Users can draw the Eiffel tower and turn it into a 3D model, for example. The aluminium pen has initiative controls with two speeds and temperature settings and is slimmer, lighter and quieter than previous models. There's a version for kids too, called the 3Doodler Start, which is a simplified, chunkier pen with no hot parts.

The iPad Pro and Apple Pencil

When an arty gadget is described as 'the closest we've ever been able to get in the digital world to actually drawing on paper,' by the Chief Creative Officer of Pixar and Walt Disney Animation Studios, John Lasseter, it must be good. Apple's iPad Pro and Pencil accessory lets novices and professionals write and draw as if they were using old-fashioned tools, taking into account the tilt of the stylus and the pressure they use, for more authentic results.

The 'ultimate' version - the 12.7-inch iPad Pro has a Pro Retina display with Tru Tone to adjust white balance and a 12-megapixel iSight cameras for shooting 4k video and taking pictures, making it ideal for serious artists and designers. But like all Apple products, its interface and software is intuitive and there are limitless drawing tutorial apps available from the AppStore for beginners who cash to splash.

For budding animators, the Loop app holds your hand in turning your drawings into short animations. While it may have taken Disney years to make its first animated feature film in 1937, Snow White and the Seven Dwarfs, Loop lets you transform a drawing into an animation in mere minutes. Tools allow users to change brushstrokes and add skins to their animations, which can easily be saved onto an iPad's camera roll, or shared on social media.

If you have a penchant for colouring and want to hone your drawing skills, there's a smart pen to rule them all. Users of the Scribble pen can simply point at an object with its built-in scanner to copy the colour, and then draw in the exact same hue. There's a 'smart ink' version that replicates a shade using a micro pump and a refillable ink cartridge, as well as a 'smart stylus' with a rubber tip designed to work with tablets.

The stylus is compatible with the Surface Pro, Android Tablet, iPad and iPad Pro and comes with different rubber tips for different pen effects. An accompanying app remembers all the colours a user has scanned and lets them name, sort and share them in a library. Both versions have 15 hours battery life on a single charge via a micro-USB cable.

You may have noticed there's a craze for adult colouring books, but what to do with the finished results after hours of painstakingly staying in the lines is a mystery. Thankfully, there's a more convenient solution in the free Colourfil app that lets you colour in on the go using your iPhone or iPad. There's no need for novices to invest in a large set of pencils, because they can colour the intricate drawings within the app using a wide range of colours – 50 shades of blue, for example. Best of all, completed pictures in the iOS colouring book can be turned into gifts, with unique tote bags, prints and cushions bearing the user's artwork available to buy using Apple Pay.

The idea of setting up a studio and getting into painting, appeals to many, but the ArtRage app for iOS and Android allows you to dabble without investing in paint, brushes and an easel. And it's easier to take on holiday. The paint simulator for tablets is claimed to be one of the most realistic art apps around and includes tutorials for beginners. It lets users keep track of how 'wet' the digital paint is, so they can blend it as they would on canvas. They can watch watercolour soak into 'paper', copy famous masterpieces, create layers, and even see a time-lapse of their paintings.

If you love the idea of the Apple Pencil but don't want to spend hundreds on a compatible iPad Pro, Wacom's made a pressure-sensitive stylus that works with less expensive iPads. Thanks to its 2048 pressure levels, the Intuos Creative Stylus 2 can sense the lightest touch of the pen on an iPad, and is claimed to mimic the feeling of a pen or brush on real canvas or paper. It's designed to work with the most popular art apps and comes with rechargeable battery, USB cable, and replacement nib.