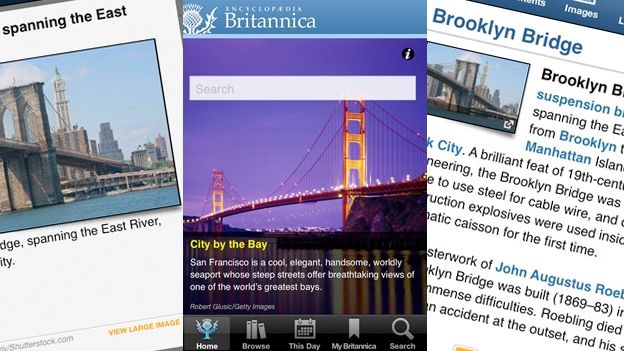 The now digital-only Encyclopaedia Britannica comes to the iPhone and iPad with a £1.99 subscription app, bringing instant access to all 80,000 articles

One month ago, the Encloypeadia Britannica announced that, after 244 years, it would not be responsible for the death of any more rainforests and had thus decided to end its time as a printed entity.

But as one door closes, another money-making space-age portal presents itself, with Britannica's publishers announcing the launch of a subscription-based iPhone and iPad app to bring instant access to the entire reference tool on your smartphone or tablet.

For £1.99 a month, users can place the entire 32-volume edition in their pocket, bringing access to 80,000 "expertly written and thoroughly fact-checked" articles, including entries from 100 Nobel Laureates and all-round heroes like Bill Clinton, Desmond Tutu and Tony Hawk.

The app's special features include a host of diagrams, charts and photographs, while the LinkMap allows users to make connections between articles.

The publisher says the app edition will "adhere to the same principles of outstanding reliability and quality for which Britannica is renowned and provide immediate access to clear, current and correct information through a unique mobile format."

The app is free to download and if you want to keep it that way, you'll be able to access the Top 100 articles at any one time and the first 100 words of all 80,000 articles. There's also an "on this day" feature that won't cost you a penny.