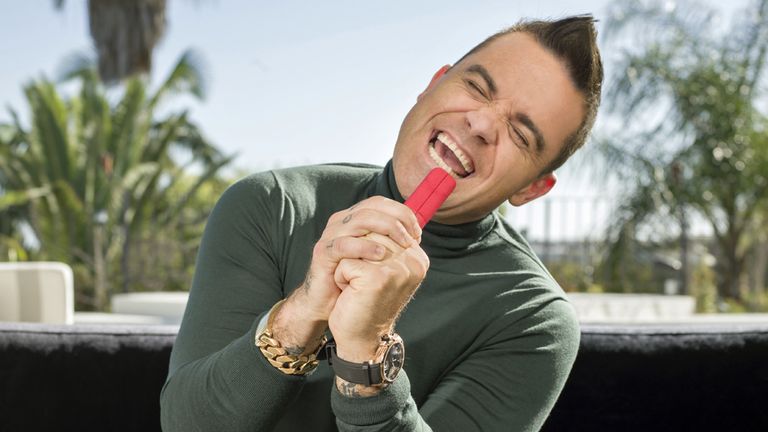 Announced over a year ago, Electric Jukebox finally launches today. It's a British attempt to take on Spotify and Apple Music, and its pricing and approach are fairly novel.

You get access to 29 million tunes, with curated playlists by the likes of Robbie Williams, Aleesha Dixon and Stephen Fry. However, rather than paying a monthly subscription, you have to pay £169 to buy this dongle and voice/motion controller. This cost gets you access to the Electric Jukebox library for a year.

After the first year, it is necessary to put £52 worth of coins into the Electric Jukebox (not literally; you pay by credit card, online), to continue receiving tunes for another year.

You plug the dongle into the TV via HDMI, then listen to your tunes through it, with a simple onscreen interface navigated with the point-'n'-click motion controller, or via voice commands spoken into the top of the controller.

“We're delighted to be working with Selfridges, Argos, Amazon and a major TV network to bring Electric Jukebox to British consumers,” said Rob Lewis, CEO of Magic Works, the company behind Electric Jukebox. “More partners will be announced soon.”

These will include, "a major TV network".

Now, we would assume most T3 readers would rather use Spotify or Apple Music, and also that anyone who's really into music would rather not listen to all their tunes through their telly, thanks very much.

However, there are less techy, perhaps older, punters, who don't want to have to muck about with mobile devices, Chromecast or Apple AirPlay/Apple TV. To them, the upfront cost of £169 might not seem excessive.

The brand's claim is that once you factor in the cost of a mobile and a means to play the music through a speaker, rival services are more expensive.

To which we say, "Yeah nice try fellas, but we already have a mobile and a speaker anyway, and Spotify is only a tenner a month. And frankly, if you're going to compare the cost of Google Music, a Google Pixel and a Chromecast with Electric Jukebox then surely you should also factor in the cost of the TELLY you'll be plugging your product into, but oh, we notice you haven't done that."

But who are we to judge? Time and the capitalist system will soon tell us if the Electric Jukebox is inspired in its simplicity, or merely an interesting notion, that's a bit poorly thought through.