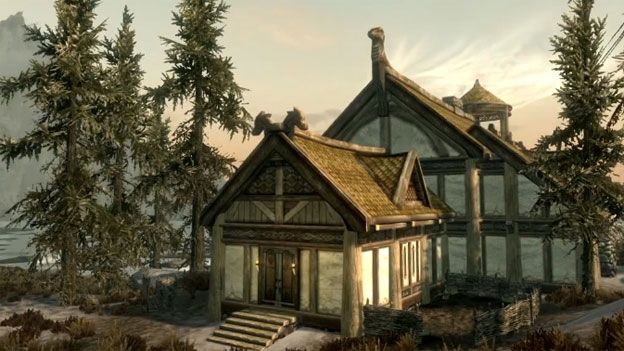 New Elder Scrolls V: Skyrim Hearthfire DLC offers players the opportunity to build their own houses and adopt their own children

Players who fancy making their own personal mark on the world of Skyrim are in for some good news. The new Hearthfire DLC for The Elder Scrolls V: Skyrim allows players to buy a deed to a patch of land and build their own house on it.

According to the trailer for the new DLC, Hearthfire will offer players new tools, such as a drafting table and a carpernter's bench that will allow players to transform raw materials into home furnishings and features. Players can create a home of any size, "from a simple one-room cottage to a sprawling compound complete with an armory, alchemy laboratory, stable, garden, and more". The trailer also says players can adopt child NPCs, and domicile their wife, child and stewards at their new home. They will have to protect their new virtual family from marauding monsters such as Skeevers and Giants.

The new Hearthfire DLC will be available on Xbox Live next week on September 4th for 400 Microsoft Points (around £3.50). It's the second piece of Skyrim DLC that Xbox 360 players have been able to get their hands on since the Dawnguard DLC was released last month. Bethesda says that performance issues are still holding back the Dawnguard DLC's release on the PS3,