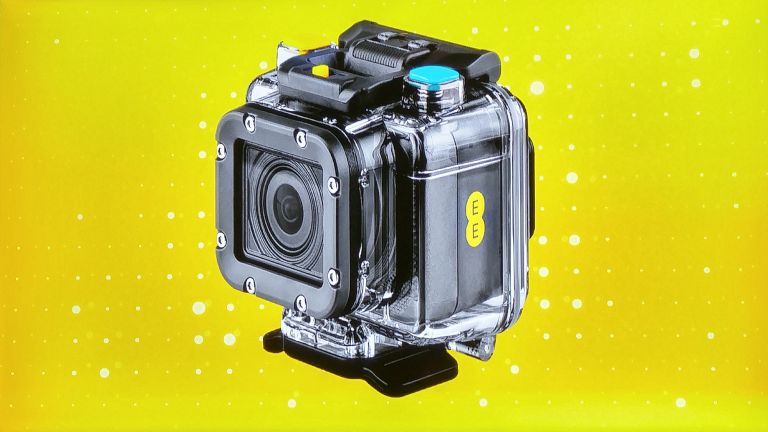 This morning EE has announced the world's first 4G live streaming action camera, which aims to compete with the likes of GoPro and Sony, as well as apps such as Periscope and Meerkat.

It's a rugged action camera designed for extreme sports and family moments alike. Itskiller feature is the ability to stream video over the internet, without the need for a smartphone.

EE's camera comes with a two rugged cases, which allow it to go under 60M of water and survive shocks, although EE hasn't revealed any figures just yet.

The camera takes footage in Full HD, with the option to use 60fps and take still photos from 13MP. There's even the option to toggle between resolution qualities on the fly.

Footage can be streamed to services like Skeegle directly or saved onto a microSD card up to 64GB and shared from there.

As for battery life, EE claims the camera will be capable of three hours live streaming at a time.

The aim is to produce a camera "where mobile wouldn't survive" and offer users an option to create "live, instant and spur of the moment broadcasts." EE revealed to TechRadar it would be producing more action cameras in the future, this is only the first step.

The 4GEE Action Cam will be released on June 16, with pre-orders kicking off from today.

As for pricing, it's available on contacts with shared plans including £99 up front and £10 a month from there, or £15 a month for 24 months.

It'll also be available on pay-as-you-go contracts for£299, which puts the 4GEE Action Cam in direct competition with the GoPro Hero 4 Silver -- so it's by no means a budget camera.

This begs the questions, why purchase EE's cam when you could get a market leader?

The 4GEE obviously boasts 4G connectivityand integrated live streaming, which no other action camera is capable off -- whether that's useful, especially in remote settings, is another question.

EE's action cam is capable of 13MP stills, against the GoPro's 12MP, and is waterproof to 60 metres compared to the Hero 4's 40 metres.

The biggestdifference, and perhaps the most important, is battery life -- with the 4GEE Action Cam boasting 4.56 hours a battery life, well above the GoPro's 1.55 hours.

Of course, the GoPro Hero has a built-in touch sensitive screen, whereas the 4GEE has a rugged looking touchscreen watch to set up and control the camera.

The specs are interesting, and it would appear some compromiseshave been made in image quality to boast battery life (which is one of the biggest drawbacks to the GoPro).

T3 went hands on the with the little device, it feels very solid, as you'd expect, and everything worked -- which is a first for press demonstrations. We'll have to spend more time with the device to see it really is a GoPro killer.