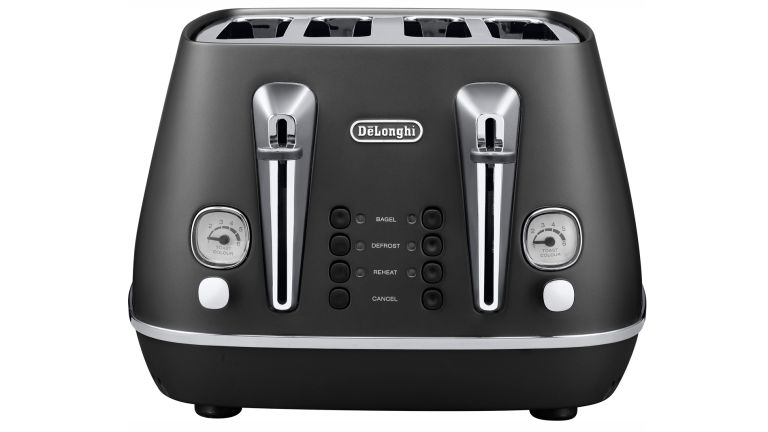 You can never have enough toast. It’s not just hot bread, it’s cuisine on a budget. And now, thanks to the DeLonghi Distinta CTI4003.BK 4 Slice Toaster you can crunch away to your heart’s content. AO.com currently has this black beauty on offer for £85, down from £109, which means you get to save a decent £24. That’s enough to buy a lot of bread to load it with.

Crucially for those of us who have toasted our fingers almost as much as our bread over the years you’ll be pleased to hear that the DeLonghi Distinta boasts a high lift feature. That means you can get your toast up and out of the machine without scalding your digits. Similarly, those problematical items like muffins and crumpets will emerge minus lots of swearing from you thanks to this fine feature.

Get the DeLonghi Distinta CTI4003.BK 4 Slice Toaster in glorious black. Now £85 was £109
You've got to love the DeLonghi Distinta's twin dials that offer to make your toast the colour that you want it on a scale from 1 to 6. The silver and white dials make a cool contrast to the black chassis.View Deal

We’ve also taken a shine to the wide slots after using many, many toasters over the years that seem particularly adept at greedily accepting your slices of bread and are then very reluctant to spit them out again. Yes indeedy, you’ll get whole toasted slices returned to you, rather than small bready segments and a pile of charred crumbs. The only blackness you’ll see here is on the exterior.

Another red hot feature is the reheat option, that lets you bring toast back to its best if you’ve forgotten to actually take it out, put on butter and eat it. Meanwhile, seeing as most of us seem to keep our bread in the freezer now until it’s needed urgently, usually at silly ‘o’ clock AM, then the defrost mode takes care of any rock-solid slices.

• Get the DeLonghi Distinta CTI4003.BK 4 Slice Toaster in glorious black. Now £85 was £109
You'll be much more inclined to buy muffins and crumpets thanks to the accommodating king-sized slots on the quad layout of the DeLonghi Distinta. No more tortured dough to see here.View Deal

Fear not about crumbs either, as you’re probably expecting a four-slice operation to throw bits of bread all over the shop. Aside from the forgiving wide slots, the DeLonghi Distinta has a brace of neat metal trays at the base of the unit that catch most of what falls from your bread as it toasts to a suitably golden shade. Simply slide ‘em out and bung it out for the birds or perhaps use them to make a delicious gratin, Or vacuum it away. There, gone.