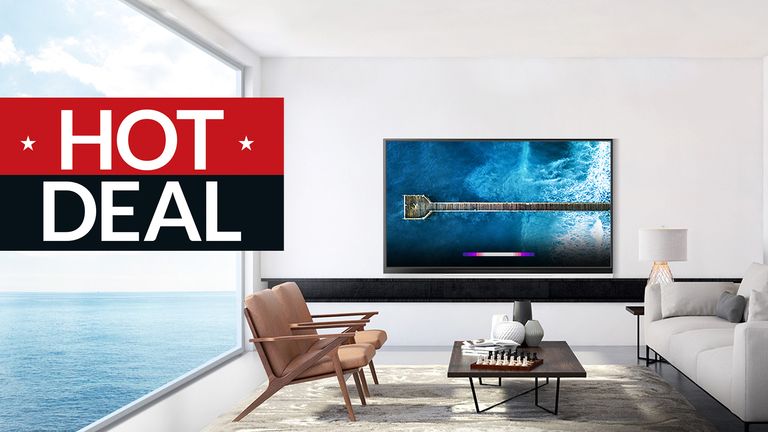 Cheap OLED TVs might seem a contradiction in terms but Currys currently has up to £1,000 off 4K OLED HDR televisions in its summer sales, as well as deals on big-screen LED and QLED TVs including the 65-inch Samsung The Frame, and TVs from LG, Sony, Panasonic and the rest. Think of it as being like Black Friday, but you don't have to wrestle anyone in the aisles for these TVs. Unless you want to.

I've zeroed in two premium OLED sets from LG as they happen to be my favourites, but there are umpteen deals, with everything from a £159 Blaupunkt to £300 off a 49-inch Sony Bravia LED TV with Dolby Vision HDR, and then up to the range-topping 77-inch LG W9, a super slim OLED TV that sticks to your wall like a poster. That also gets £1,000 off its usual price. You can also get a handy £100 off the Samsung's chic The Frame QLED TV in its 65-inch incarnation

What you will find with most of these deals is that you need to enter a code at checkout to get the full discount. For instance, the 77-inch LG C9 is looks like it is only £500 off at a glance, but by entering TVSAVE500 at checkout, you get a further £500 reduction, making the headline £1,000 figure. Woop!

LG OLED65C9 £2,899 | Was £3,299 | Save £400 at Currys
Proving the old adage that you should never pay original RRP for a telly, this fantastic 2019 OLED TV is still relatively new, and among the very best TVs that will emerge this year, yet has had its price dropped by £400 already, including Currys voucher code (TVSAVE100). Currys throws in 18 months 0% credit, free delivery and installation and the option of free 'recycling' for your old TV, which we assume means they take it to Cash Converters.View Deal

LG OLED77C9 £6,999 | Was £9,999 | Save £1000 at Currys
The 77-inch version of the LG C9 is absolutely to die for, if you have the room. As with the 65-incher there's Freeview HD and Freesat HD tuners, 4 HDMI ports and a great smart TV setup for streaming and catch-up stuff. However, everything is that much bigger, and therefore better. It normally costs silly money but today the money required is… slightly less silly. Well, it's £1,000 less.View Deal

Why you should buy an LG OLED C9

The C9 range offers incredibly cinematic 4K and upscaled HD visuals, supports Dolby Vision HDR and Dolby Atmos 3D surround sound, and then cements its appeal with a well thought through smart TV system that makes it easy to find the content you want. It's also good at upscaling standard def, so don't feel like you'll be stuck watching nothing but David Attenborough shows and contemporary Hollywood blockbusters for the rest of your life. It doesn't have the eye-piercing brightness of a Samsung QLED in full flight, but it's easily bright enough for most sunlit rooms and positively orgasmic when the lights are a little dimmer.

As of this month, the LG OLED range also boasts Apple AirPlay for all your iOS video and audio streaming needs.

Shop the rest of the Currys TV sale by price

Shop the rest of the Currys TV sale by screen size

Shop the rest of the Currys TV sale by screen type