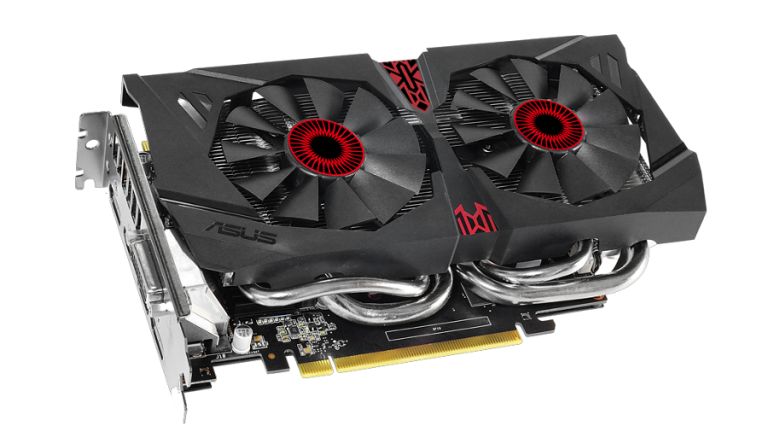 If you're serious about gaming, you're going to need a desktop PC with a graphics card that can push enough pixels to cope with today's demanding titles.

However, it's well worth remembering that you don't always need to buy the most powerful and expensive card available. Only if you're rocking a £300+ 4K monitor would you need to splash out on a Titan X SuperClock, for example. If you game with a 1080p monitor, a more modest (but still meaty) R9 380X would serve you well.

Read on to find a selection of the best graphics cards, starting with the most expensive. As always, check that your existing PC meets the requirements of the graphics card before splashing out - or you may find that you'll have to upgrade other components to use it.

The most expensive Nvidia graphics card around

+The most powerful consumer GPU+12GB of video memory

The Nvidia Titan X isn't good value for money at all, considering it costs more than an entire mid-range PC. But it is nominally the most powerful consumer GPU you can buy, equipped to handle gaming at 4K resolution better than almost anything else on the market. It has 12GB of GDDR5 graphics memory, 3072 shaders and a core clock frequency of 1216MHz, bumped to faster speeds by EVGA for this 'SuperClock' edition.

A card like the Titan is really for the most serious of gamers with the most money to burn. Chances are, if you're considering a Titan X, you already have a 4K display (or three) to enjoy it with. But if you like the idea of so much graphics power, a slightly less expensive card is still a great option.

With quicker clocks it can out-Titan a Titan X

The GeForce GTX 980Ti isn't quite as powerful as the Titan X, but thanks to the higher clockspeeds of overclocked editions like this Zotac card, it will often best a Titan X for considerably less money. That means you're still getting a graphics card that will cope with any game at any resolution up to 4K. At that particular resolution you're still going to be taxing the amount of video memory on offer, and stressing the graphics processor, but there's still a huge amount of gaming power here.

The GTX 980Ti comes with 6GB of GDDR5 memory as standard, with 2816 stream processors, and this 'AMP' edition from Zotac boasts some of the highest clock speeds of any GeForce card, elevating its performance considerably higher than the standard GTX 980Ti.

The most advanced video memory around

-Only 4GB of HBM, struggles at 4K-Water-reservoir takes up space
Check Amazon

The Fury X is AMD's answer to Nvidia's GeForce GTX 980Ti, but this card struggles to match it for performance. It does though feature some new tech, a few clever tricks and some neat optimisations.

Uniquely, AMD's Fury X line of cards have been designed to use an all-in-one liquid cooling system, similar to those sold by Corsair, Cooler Master and others for use with a computer's CPU. That means you'll need a spare fan mount in your case to fit it, but it should also mean quieter running and lower temperatures than with a standard cooling system.

You get 4096 stream processors, 256 texture units, and AMD has recently moved from GDDR5 to faster HBM memory, with a massive 4096-bit memory bus, meaning it can shift more pixels and polygons with each operation. There's a limit of 4GB with HBM and thus with the Fury X, which doesn't sound a lot, and with the high-res textures in the latest games it can struggle at 4K.

Almost all the performance of the Fury, but half the size

-Small size doesn't make it cheaper-Not quite as powerful as the Fury X
£486.58
View at Amazon
5 Amazon customer reviews
☆☆☆☆☆

Building a mini PC normally means forgoing a discrete graphics card, or having to use a weedy, low-powered one, so you unfortunately won't be able to play any modern games on your tiny new PC. AMD has realised this and created the Nano, a dinky little video card that's short enough to fit into the smallest of PC cases while offering the performance of a far bigger GPU.

In fact, it has the same 4GB of 4096-bit HBM memory found in the Fury X, with the same number of texture units and ROPs. While the clock speed is 5% lower, the power envelope has dropped to just 175W, meaning you get some stellar GPU performance that not only squeezes into the tightest of spaces, but won't need a monstrous power supply either. This is an impressive feat of graphics card engineering indeed.

A great buy, if you get it at the right price

+Can be found at decent prices+Plenty of gaming performance

Although the GTX 980 occupies the middle of this list, it absolutely offers top-end performance that will handle just about anything you throw at it. There's a beefy specification, with 2,048 stream processors, enough hardware for 4K gaming at medium detail, with the highest frame rates and detail settings catered for at every other resolution. Until the later launch of the GTX 980Ti, it was the fastest non-Titan Nvidia card money could buy.

But with the 980Ti now sitting above it, offering notably better performance, more shaders and more memory, we'd pick one of the better value 980 cards such as this model from Palit, over the more high-end overclocked models, some of which currently aren't much cheaper than the 980Ti.

Another powerful card from AMD

Like the 980, you should expect great performance at resolutions up to 2560 x 1440, with liberal application of every piece of eye candy a game has to offer, while above that you might need to reduce a few settings to ensure a consistently smooth frame rate.

A good balance of value and performance

+Best performance for under £300+Still equipped to handle 1440p

The GeForce GTX 970 is really Nvidia's top-end 'mainstream' card, meaning it's affordable to most people with realistic budgets. However, the GTX 970 is still in the upper bracket of gaming cards.

At 1920 x 1080 (full HD) resolution, expect pretty much any game to run at a great frame rate on the highest possible detail setting, and you should expect almost the same at 2560 x 1440. Even 4K gaming is almost possible, as long as you're realistic about the graphics settings, perhaps leaving anti-aliasing turned off and toning down some of the more extravagant effects.

Puts clear air between it and the nearest green-tinged rival, Nvidia's GTX 960.

The Radeon R9 380X is AMD's latest mid-range GPU and has been targeted as one of its 2560 x 1440 graphics cards. That might be a bit of a stretch for the relatively old technology inside the R9 380X but it's still an absolute stonking card for 1080p gaming. It's also not a bad price, with most versions of the card being well under the £200 mark and nailing the GTX 960 in terms of gaming performance.

And because it's using Asus' STRIX cooling design it stays impressively quiet when the fans are spinning in-game. And when you're just messing around in Windows it's silent because they won't start up until it tops 60ºC.

A great choice for mainstream gaming

The GTX 960 is a big step down from the rest of the Nvidia cards in this list, with 640 fewer stream processors, but it's a significant step up in affordability, with a price that's well under the magic £200 level. But even at this more affordable price, you're still getting a card that will deliver a great gaming experience at 1920 x 1080 resolution, which is still the most popular screen size in use today.

Thanks to the custom cooler Asus has used with this model, including multiple heat pipes for improved efficiency, you get a much better core clock speed than the base model, for what seems a fairly minor price difference.

An entry-level graphics card that's suitable for light use, the GTX 750Ti will appeal to anyone who wants to dabble in the odd game, but without the desire or need for the best possible performance. In other words, resolutions, frame rates and visual clarity play second fiddle to just having something to get games working.

The 750Ti is a fairly basic card, but it's still based on Nvidia's up-to-date Maxwell architecture. As such, it's good enough for all older titles, and will at least run modern games too, although with quite a few restrictions on the detail settings and only at 108p. Taking all its power from the motherboard though means it can be a drop-in gaming upgrade for any basic, budget PC.