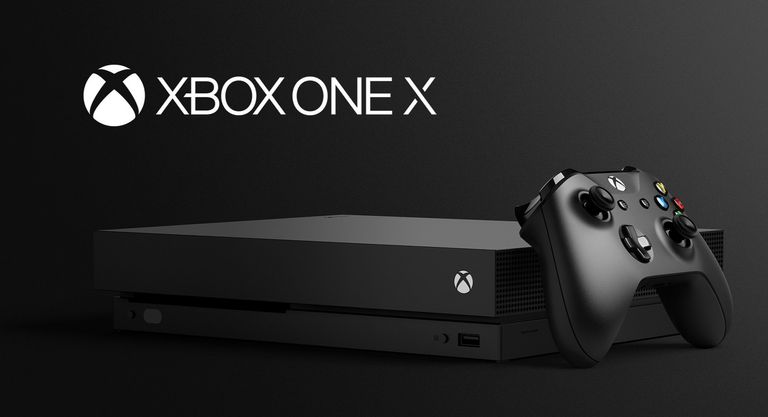 It's taken four long years, but we've finally got the Xbox One console we were promised all those years ago - and the great news is that it is awesome! Less of a mid-generation update and more of a full on new console all in itself, Xbox One X finally brings 4K gaming to gamers who don't have access to a powerful, overclocked PC.

So, to help you get the most out of the new 4K console, we've filtered through all the most awesome Xbox One X games, accessories and hardware to get your man/woman cave fully kitted out this festive season.

So no Xbox One X buying guide would be complete without the pièce de résistance itself. This console is a gamechanger - quite literally, if its 'Enhanced on Xbox One X' list is anything to by - adding in 12GB of GDDR5 memory, 8-core Custom AMD CPU is clocked at 2.3GHz and a 6 Teraflop GPU offering native 4K right there in your living room/bedroom/man cave.

With support for HDR built in - much like it was with the slimmer Xbox One S - Xbox One X is the most complete gaming package out there right now. Games load faster, perform at higher framerates, and offer graphical output that will make your face melt. Oh, and it has a 4K UHD player built in - so that's your film nights covered, too.

Nothing says 'I Heart Xbox' like a customised Xbox One X Wireless controller. No more white or black choices - now you can log into the Design Lab and create your very own colour scheme design.

You can choose from existing versions based on your favourite games - including Shadow Of War and Sea Of Thieves - and tweak them to your own tastes, or build a design from the ground up. You can even give your creation a special name and have it embossed on the bottom. It's a work of art, and the ultimate personal way to show your gaming passion.

Few games show off the technical capability of Xbox One X as well as Turn 10 Studios' incredible current-gen racer. As Gran Turismo effectively evolves into a lesser Forza, the seventh instalment thrives with dynamic weather, customisable drivers and much more.

Add in over 700 cars (no, you really did read that number correctly) and 32 different global locations, and you've got the most complete modern racing simulator money can buy. And looks better, runs better and racers better when playing on Xbox One X. Sold.

Presented as the poster boy of Xbox One X's 4K-driven unveiling at E3 2017, Middle-earth: Shadow Of War is a tour de force of why playing Monolith's semi-open-world action-RPG on Xbox One X is the only choice.

As well as enjoying numerous technical improvements (such as greater texture details, increased draw distance, etc), the developer has designed bespoke modes built specifically for 4K and HDR, turning Mordor into a vibrant and mesmerising place to explore. With the power of high-end PC in your front room, killing orcs has never looked this good.

Cuphead might have an art style that celebrates the animation heyday of the 1930s, but its retro looks still vivaciously pop on screen. Especially when they're running in native 4K with the power of Xbox One X behind it. This run and gun platformer has long been in the making, and the final product is a must have for any Xbox One X owner.

As well as looking incredible - and boasting a soundtrack that will give your surround sound speakers and headset a serious workout - it's also one of the toughest games out there right now? Want a game that's worth the asking price? Cuphead is it.

With the DX902, Panasonic is offering one of the closest ways to enjoy a professional, high-end reference monitor in your home without having to fork out for a second mortgage. Its 4K, HDR-ready screen is so clear and crisp your UHD films and 4K gaming will practically ooze out of display.

Available in 65 and 58-inch models, the DX902 uses Panasonic's own Honeycomb filter for optimum illumination and offers one of the cleanest, more vibrant picture qualities we've ever seen with our bare eyes. Plug your Xbox One X to this TV and you'll never be able to watch any inferior model again.

Dock, store and charge your Xbox One X controllers with this simple yet robust charging dock from the minds at Venom. Supplied with two 700 Nimh rechargeable battery packs, the system provides a handy rapid recharge cradle for up to two of your XO wireless controllers.

It includes red LED charge indicators, which turn green once controllers are fully charged, and provides a whopping 18 hours of gameplay on a single charge. If you're looking for an all-day session on Forza 7 or Middle-earth: Shadow Of War, then this is a must have addition to your setup.

Why have a rubbish TV stand when you can have can entertainment powerhouse? The BRICK BR1503 from Spectral comfortably falls into the latter catagory, with a pair of solid cabinets each with three separate compartments inside, all of them 'floating' above a smaller plinth.

The stand is finished in high gloss silver with a hint of sparkle while the single length glass-clad front flap hides away your AV equipment, including an in-built BRA2 Sound System From Canton and smart device integration. It's a TV stand that does more than house your gadgets.

Designed to complement and enhance your viewing and gaming experience, the  3.1 Home Cinema System from Sonos is something else. With nine amplified speakers, everything from the 4K UHD films in your disc drive to the games saved to your HDD, this audio system gives every sound effect and piece dialogue a new lease of premium life.

It also boasts a subwoofer to provide soul-shaking bass, with two force-cancelling speakers for deep sound and zero cabinet buzz or rattle. It's a must for any home entertainment hub, however big or small the room.

There are gaming chairs, then there are GAMING CHAIRS, and the X-Rocker Elite Pro falls into that powerful, capital letter-invoking catagory. It's more than just a place to park your backside when you're sitting down with your new Xbox One X.

With an in-built audio system - complete with 2.1 speakers built into the chair - and Bluetooth connectivity, it's a comfortable smart hub that connects to your TV and console and provides immersive feedback via two in-built vibration motors. It'll transform how you enjoy your games, and put your other chairs to shame.

Investing in a new console upgrade means you're going to need a high-end headset to keep your ears warmed with all that gorgeous sound. The A50 Wireless 7.1 headset from Astro is a brilliant choice - not only does it offer powerful 7.1 surround sound, but its 5GHz wireless transmitter provides clear, low-latency voice communication so you're chat is always on point.

Plus, it comes in a rather fetch green finish - because it always pays to be on brand. With 15 hours of use on a single charge - and its own charging station - the Astro A50 is a must have peripheral.

More about Xbox One X