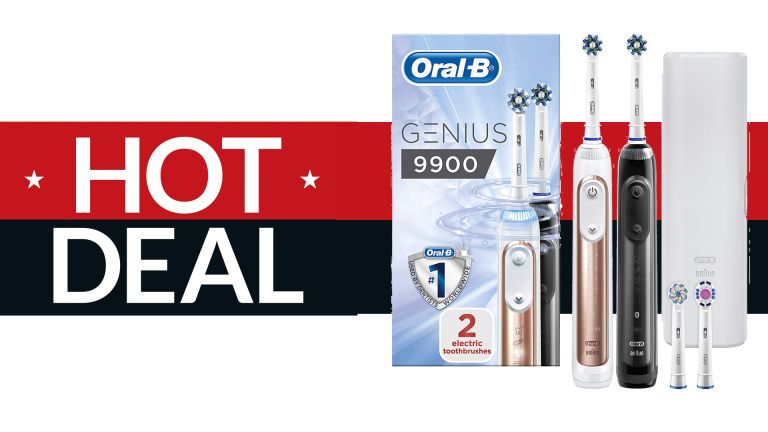 You will note that the actual saving is somewhat less than £460 but consider this. The RRP for one Genius 9000 is listed as £299 – so logically two of them should be nearer £600 than £100. Even with the current sale on, a single Genius 9000 is £109 at Amazon. So with this twin-pack you're only paying £31 for an entire second brush. Practically two for the price of one, in other words.

Whether you opt for big savings on one brush, or even bigger savings by getting a double pack, the Genius 9000 is among the best electric toothbrushes you can get. That's not because of the largely pointless 'smart' functionality that gives it its 'Genius' name. This is meant to watch you as you brush, via your phone's camera, but it's not really accurate enough to glean much of any use from.

No, the real genius is that it serves up expert cleaning, with 6 modes including one for tongue cleaning. Gum Guard technology warns you if you're pressing too hard, so the clean is as safe as it is effective – obviously this is especially handy for anyone who's new to electric toothbrushes, or has no central nervous system.

Annoyingly, you have to start the brush to select the mode – so it could be whirring away with toothpaste flying, while you try to toggle from 'whitening' to 'gum care'… but you do pick up the knack of doing this fairly quickly.

The four brushes it comes with is an unusually generous allotment, and should last one person a year, easily. At £299 this is somewhat over-priced really, but at £109 or £140 for a pair, it's a great bargain, and your teeth and gums will love you for it.

Oral-B Genius 9900 £140 | | Save £33 at Amazon
Perfect for a couple, this comes complete with 4 rotary brushes, a charger, a travel charger/case thing and a mount for your smartphone for the Genius's 'smart' brush tracking. The headline feature, clearly is that you get two entire Genius 9000 toothbrushes for your money, one in black and one in rose gold. That gender-tailored colour coding might seem a little regressive to woke folk, but it's still a great deal.View Deal

Oral-B Genius 9000 £109 | Was £299 | Save £190 at Amazon
Do you live alone, with nobody to love you? Then you may as well get just one Genius 9000. Actually, with 4 brush heads thrown in, you could use it between two of you anyway, and not have to bicker over who gets the rose gold one. Just over £100 for this brush is a solid deal, but it also makes it clear just how good the deal is on the double pack.View Deal