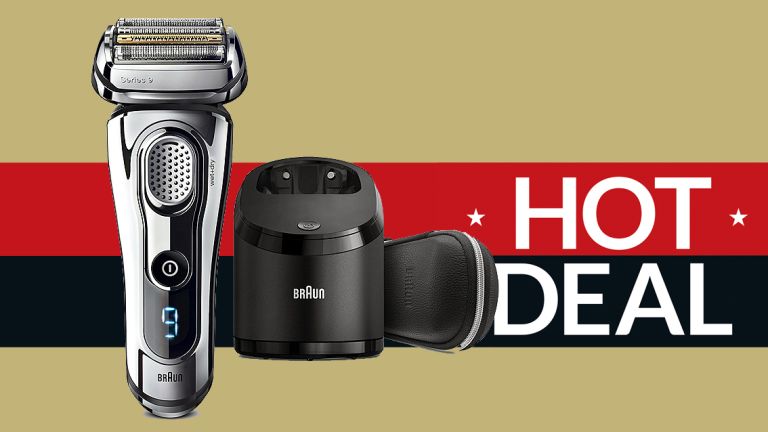 Looking for a great electric shaver deal? Try £300 off the most high-end shaver you can buy. Flagship electric razors with a cleaning/charging station, such as the Braun Series 9, are premium items aimed at business class jet-setters. However, thanks to extremely regular price cuts, they can often suddenly become way more affordable. This is often true around Amazon Prime Day, but it's also true today, as Amazon is cranking out its best deals on the latest models of its flagship Series 9, the 'just-below-flagship' Series 8 and, in fact, every other Braun electric shaver.

Just to maintain the cosmic balance, there are also some great Philips shaver deals to be had too.

These are among the lowest ever Amazon prices on two genuinely top-of-the-line shavers. Both of them come with cleaning stations for charging and, obviously, cleaning. For those who think there might be a typo above, yes the Series 9 is now cheaper than the Series 8 and no, we don't know how that's happened.

Braun Series 9 9390cc £200 | Was £500 | Save £300 at Amazon
The current state of the art in Braun shavers, this version of the Series 9 comes with a charging station that deep cleans the blades with alcohol. The 5 synchronized shaving elements of the Series 9 mean you get smoother with fewer strokes. It's not exactly unusual for this shaver to be at this price, but it is as cheap as it's currently going to get, at least at Amazon.View Deal

Braun Series 9 9340s £230 | Was £450 | Save £220 at Amazon
The Series 9 is Braun's longstanding, top-of-the-range, top-of-the-morning shaver for men. This version doesn't come with a cleaning station but costs more than the one that does. Figure that one out. While I am fairly confident no sane person has ever paid £450 for it, today's discount makes it almost a steal.View Deal

Braun Series 8 8391cc £210 | Was £420 | Save £210 at Amazon
Also packing a charging/cleaning dock, this model has four shaving elements to the Series 9's five, but again is somehow more expensive than it today. So go for the 9390cc, would be my advice.View Deal

Braun Series 7 7865cc £155 | Was £330 | Save £175 at Amazon
Another step along the affordability road to cheapness, the Series 7 is still perfectly suitable for most men's needs especially if you shave every day. The more expensive models are advisable if you are a twice-a-week guy, however. Comes with a charger and cleaner, and also a 55% discount on what Amazon says is the normal price.View Deal

Braun Series 7 7842s £155 | Was £280 | Save £125 at Amazon
There's no cleaning station… but would you actually use that anyway? Ours always just sit forlornly in the bathroom cupboard, forever and ever. However, given that today you can get one with a station for the same amount, it is a bit of a dilemma…View Deal

Braun Series 5 5197cc £125 | Was £250 | Save £125 at Amazon
Slightly cheaper and crappier than the above, but comes with a cleaning station. This model has only ever been cheaper than this twice at Amazon, and could make a great gift. View Deal

Why you should buy a Braun Series 9

The Braun Series 9 is one of the best shavers you can get, especially if you prefer foil shavers to Philips-style rotary numbers. The docking station is not essential, but if you like your razor to be in a state of perfect, almost hospital-grade cleanliness at all times, you need it. You could also take the view that at this price, you might as well get the model with the charging station, because it's about the same price as the one without a charging station – an especially handy consideration if you're buying as a gift.

The Braun Series 9 has titanium tipped blades – that's what gives that golden appearance; it's not gold paint intended to make it seem more blingy. The culmination of all the experience Braun has garnered from its many, many years  of razor making, the Series 9 actually adapts to the shape of your face and the density of your follicles, giving a more efficient, less irritating shave that's 'personal to you'.

As ever on electric shavers there's a 'slide-out precision trimmer' for taming sideburns and doing the tricky bit under your nose, so it doesn't look like you're growing a Hitler 'tache.

The Series 9 is 100% waterproof, and can be used dry or in the shower, or with shaving foam or gel. It's also easy to rinse clean.

Built in Germany, Braun says it's 'designed to last for up to seven years', although the shaver head needs to be replaced every 18 months. This may vary depending on how often you shave, of course. Unlike lesser electric razors, this Braun is pretty good at dealing with 2-3 days of stubble growth.

The charging and cleaning station blasts the head with an alcohol-based cleaning solution. You'll need to replace the fluid capsule every month or so. These days you can get 'lemon fresh' ones, so the shaver doesn't just come out smelling  like an operating theatre, or like it's been drinking all afternoon.