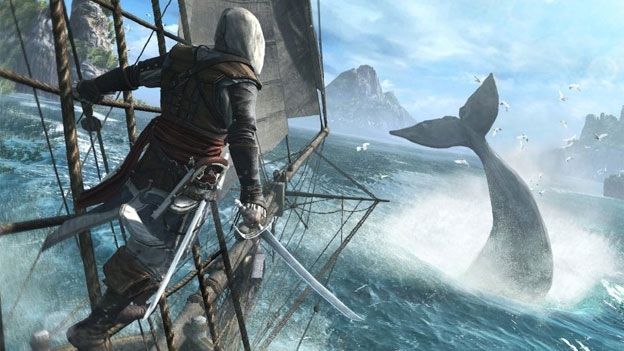 Finally! A story about Assassin's Creed 4: Black Flag that isn't a leaked piece of information the publisher lost control of. The latest news concerning the new planned pirate sim comes from People for the Ethical Treatment of Animals (PETA) who have roundly slammed Assassin's Creed 4 for containing scenes that show cruelty to animals.

At Ubisoft's London reveal event for their new game, it was revealed that one of the many activities players may engage in involves harpooning whales. Pop culture website VentureBeat decided to tap PETA up for a reaction to this new gameplay and the organisation's response was unequivocally negeative.

"Whaling-that is, shooting whales with harpoons and leaving them to struggle for an hour or more before they die or are hacked apart while they are still alive-may seem like something out of the history books, but this bloody industry still goes on today in the face of international condemnation, and it's disgraceful for any game to glorify it," A PETA spokesperson said."PETA encourages video game companies to create games that celebrate animals-not games that promote hurting and killing them."

PETA has criticised the gaming industry before about issues concerning violence against animals. It previously attacked Pokemon, stating the way creatures in that game are treated could be likened to the abuse of animals. Heaven knows what would happen if they were ever to notice that players can earn achievements and trophies for betting on cock fights in Sleeping Dogs...