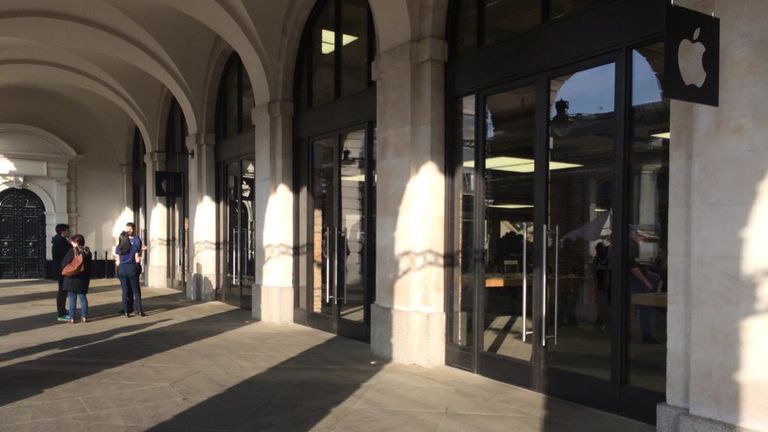 Part of the way Apple has built its brand to be not only the biggest company in the world but also a lightning rod for both the positive and the negative things people think about tech, is through the way it launches its products.

For years, we've seen huge throngs of (delete as applicable) discerning Apple enthusiasts/brainwashed sheeple clustered outside Apple Stores the world over as iPhones and iPads were launched. They always struck me as a bit like the kind of people who gather outside the hospital when a royal princess is about to drop a sprog. Except on those occasions, they're not allowed to rush inside then come out clutching bits of royal baby, shouting “I've got one!”, before putting it on eBay, or seeing if it will blend. That would be grotesque.

It was with some trepidation, then, that I went to the – now let me get this straight, because it's quite confusing – the launch of the pre-order of the Apple Watch. Not the pre-pre-order launch announcement event, or even the pre-pre-order launch event. The pre-order launch. Here, one could go into an Apple Store, where Apple would graciously allow you to try one on, hand them a load of dosh, then leave, with the anticipation of hopefully receiving a watch in a few weeks, stock levels allowing.

I've got to be honest, I've never gone along to an Apple “event” before. This was firstly in order to maintain my perceived integrity in the face of widespread public cynicism about Apple's media management techniques – you know, they're humourless, didactic, won't give their stuff to anyone who doesn't attend lengthy briefing, have a general resemblance to Scientologists – all that unfair stuff. I don't know where that comes from.

Oh, and the other reason is that Apple had never bothered to invite me before, for whatever reason.

Shame, then, that it turned out that its launches ain't what they used to be. The focus now: delivery rather than hysteria. Online rather than bricks and mortar.

I turned up at the flagship London Apple Store. There was nobody outside. I went in and there were quite a few people. Admittedly, every single one was a journalist or worked for Apple, but that's fair enough as this was a “press preview” in the hour or so before the opening time proper. So really I was at the pre-pre-order event.

Interestingly, practically everyone there had already played with the Watch anyway, and some of them had even reviewed it in effusive terms for various publications. So they had no reason to be at the Store at some ungodly hour, other than to maintain cordial relations with Apple.

After half an hour, everyone was ordered out, and there was still nobody outside. This is where it got a bit odd, as we transitioned from Old Apple Launch to The New Way. Inside, the Apple Store people in blue shirts were still having motivational speeches and doing their pre-opening whooping, and there was indeed a grand-ish opening, complete with countdown, just as if there were a crowd of Biblical proportions outside, anxiously fingering its credit cards in readiness. But the only people outside were the same media persons who'd just been kicked out, so the Store could officially open.

So anyway, we all trooped back inside and then – yes! –a customer was found, so he was immediately surrounded by the UK press and their cameras while an Apple Store blue-shirt took him through the many impressive functions of the Watch. It was like the Truman Show. Outside, by the complimentary Starbucks dispensary, I heard one potential punter ask if she was allowed to come in.

Meanwhile, though, the real story was breaking online – difficulty pre-ordering, servers going down, much excitement, strap shortages, the app works better for ordering than the website, “what combo of strap and face did you go for?” Oh my, such times.

And not for the first time, I had to conclude that Apple, for all its dourly efficient marketing and the fact the actual Watch doesn't really appear much better than any other smartwatch – I don't know, it takes me longer than a 10-minute fiddle in a crowded shop full of anxious-looking PR wonks to work out if something's any cop – had been pretty damn canny.

With this pre-order system, customers are able to know exactly when their new precious will arrive and they can try one on in-store then buy it online, just like they do with everything nowadays, except in this case they can't get it cheaper. Apple can make the most efficient use of its supplies, and perhaps more importantly, it reinforces its standing as a serious, premium brand. Because really, the whole screaming-queues-outside-Apple-Stores thing? That was pretty naff.

Read more: Apple Watch not blingy enough for you? Goldgenie had the solution