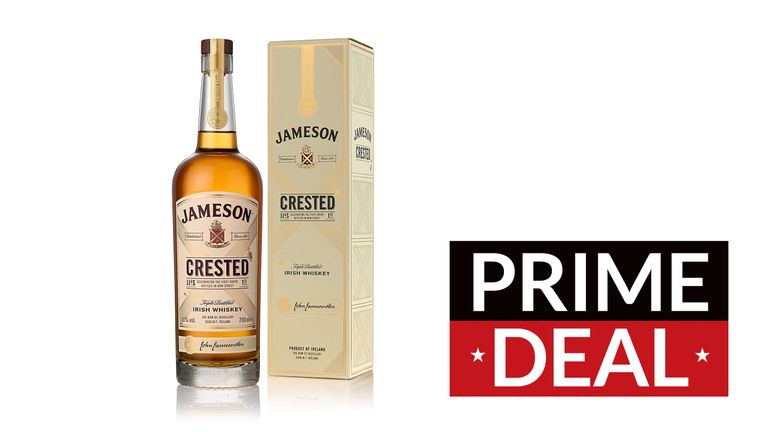 Amazon Prime Day has brought along loads of great deals in - groceries?! Before we scare you away, we aren't talking about Warburtons loaves for 50p or dozens of eggs for a pound. No, we are talking about alcohol, the good old boozerony, liquid gold tricking down the back of your throat.

The most famous Irish whiskey brand doesn't need introduction. Founded in 1780, Jameson was one of the six main Irish Whiskeys, now produced in County Cork. Jameson is one of the most recognisable whiskey brands and also the best selling Irish Whiskey in the world. In 2018, it sold 7.3 million cases in 130 countries worldwide. Although it is most known for its Jameson Original Blend with the iconic green bottle, it comes in nearly 20 varieties, one of which you can buy for a discounted price this Amazon Prime Day.

If you are anything like me then you probably can't wait for the 5th season of Peaky Blinders to air. To make the wait a bit more bearable, why not get the Peaky Blinder Whiskey set that comes with a Gasby-style cap too. No razor blade included though, probably for the best.

The other two Irish Whiskey deals are not too shabby either, Conor McGregor's Proper No Twelve being discounted for 30 per cent, no less. Not a bad deal for a beautiful whiskey if you ask me.

Jameson Crested Irish Whiskey | £21 | Was £24 | Save £3
Intense sherry pot still notes on the nose and delicate fruity taste with toasted wood & chocolate undertones. The only thing you might need with this exceptional whiskey is some ice and and a dash of water to bring forward the complex flavours.View Deal

Peaky Blinder Whiskey Gift Set with a Gasby Style Cap in a Gift Box | £29.99 | Was £34 | Save £4.01
Not like your average whiskey gift set with the tiny samples, the Peaky Blinders Whiskey Gift set comes with a 70cl triple-distilled bottle of Irish Whiskey and a Gasby-style flat cap. Admit it, you always wanted to do the Peaky-walk through the rough streets of Manchester too.View Deal

Paddy Irish Whisky | £16 | Was £17 | Save £1
The Paddy Irish Whiskey is a blend of all 3 Irish styles of whiskeys. Floral and fruity on the nose with a hint of grain, releasing flavours of toffee, vanilla and sweet spice. Produced is Cork, the same county as Jameson. Taste the green pastures of Ireland!View Deal

Scotch whiskey or bourbon lovers shouldn't feel left out either, more than 30 different bottles are on offer of the former on this Amazon Prime Day. If you aren't a Prime Member yet, sign up for a free trial and browse all the great deals on Amazon today. Who knows, you might find other great products too to try?

Come to T3 to learn about all the best Amazon Prime Day deals. Be smarter than the rest. Check out our other roundups too.