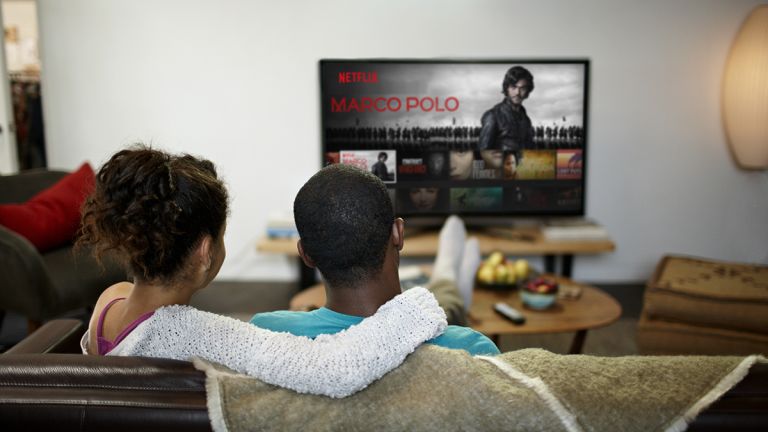 Chrismas Day excitement has passed, you're trapped with relatives, have glorious work-free time on your hands, you're skint, and desperate for entertainment to fill some hours. The UI may rub shoulders with iTunes and Ikea furniture assembly instructions for pure,bloody-mindedawfulness, but there's a treasure trove of wonderful TV just two-to-three hours of frustrated clicking away on Netflix.

Save your prodding finger with thiscracking list of odd, to downright bizarre movies and TV shows.

Sentenced to the Top Gear-centric purgatory of Dave, this is one of American TV's best-kept secrets. The MacGuffin sees photographic memoried Mike Ross (Patrick J Adams) bluffing his way into one of New York's slickest law firms. Pearson Hardman exclusively takes Harvard graduates as trainees, but associate Harvey Spector and legendary closer Harvey Spector (Gabriel Macht), bored of identikit graduates, likes the cut of Mike's fraudulent jib. Cue a wonderfully-worded bromance with legal cases supplying the drama alongside bubbling under a will he/won't he get found out sub-plot. Come for the whip-smart script, stay for the cerebral drama and impossibly envy-inducing photography of New York.

What We Do In The Shadows

The Flight Of The Conchords looms large over this brilliantly domestic vampire mockumentary. Viago, Deacon, and Vladislav are just like any other New Zealand flatmates only, of course, they happen to be hundreds of years old vampires. Mostly improvised to capture that awkward, natural flow, the gag, mostly, is that these painfully old-fashioned, behind-the-times blood-suckers fit perfectly into this comedically yokel, patently unfashionable country with nary an eyebrow raised. Getting fresh blood is their biggest issue, alongside the ongoing beef, they have with the local werewolf pack, played with painful politeness by The Conchords' Rhys Darby. It's a slow burner, rather than howler inducing, but none the worse for it.

Julian Barrett and Noel Fielding star as Howard Moon and Vince Noir, hapless keepers at the run down “Zooniverse” in a wonderfully absurd “sitcom” that manages to channel Monty Python, Morecambe and Wise and Reeves and Mortimer all at once. Barrett, especially, is electric as nihilist loser Moon, combining psychotic vanity and excruciating, crumbling insecurity. Plus, the songs – it's a kind of musical – are wonderful. Featuring some of the most unsettling characters the Beeb has ever funded, series three also introduces the Crack Fox, the stuff of genuine nightmares and possibly the creepiest character ever to grace a comedy.

An engagingly absurd and silly Andy Samberg curio, the Saturday Night Live and Brooklyn Nine-Nine veteran plays an accident-prone pseudo stuntman and daredevil, determined to successfully leap 15 school buses on his moped to win fair maid (Isla Fisher) and the respect of his stepdad (Ian McShane) in need of a life-saving operation. Rewritten for Samberg by his Lonely Island chums after Will Ferrell dropped out, and directed by Lonely Island chap Akiva Schaffer it's a loosely plotted set up for a series of set pieces where Samberg essentially larks about, improvising and being very, very silly while thoroughly enjoying the wacky, and hugely quotable script: “Soul of the eagle! Cool beans!” Includes a wonderful, Footloose inspired dance scene in a forest, that ends in tears.

Series four dipped famously when show runner Dan Harmon was kicked off his own comedy show (calling it a “sitcom” feels too constraining), but that's the only low point of one of the most genuinely inventive and gleefully funny shows on the box. Set in the purgatory of an American Community College, Joel McHale is a former lawyer forced to take a job there after he's found out faking his degree. The ensemble cast, including Alison Brie, Ken Jeong, Chevy Chase and Gillian Jacobs dazzle. Really, actually, dazzle in episode after impossibly high-quality episode. It's achingly meta and worships at the altar of pop culture references, and again, was a victim of channel and scheduling hell in the UK. It never gained any real traction or mainstream cultural cachet over here, but if every episode of this delightful and eternally surprising and creative laugh marathon isn't on your radar, you are genuinely all the poorer for it. If there's one thing you watch on this list…

Yes, it's essentially injecting testosterone directly into its own eyeballs. Yes, the plot is more route one than a Sam Allardyce team. Yes, it's more improbable than any Rocky movie which it steals every cliché and its very conventional plot from – including sick children, alcoholic dad, and feuding brothers. And yes, it shamefully tweaks your heartstrings in the most manipulative, cynical way. But if you're not bawling like a teething toddler by the final, inevitable match up between estranged brothers and unlikely UFC pros Tom Hardy and Joel Edgerton, that is the literal definition of a human with no soul. A career-making turn from Joel Edgerton as the teacher-cum-octagon-prowler holds the film together, but Tom Hardy is immense as the Mike Tyson-like destroyer, taking out opponents faster than Malcolm Tucker on Ritalin.

It descends into slightly disappointing schlock in the final act, with Sam Neil chewing scenery like a deluded beaver. But up until that point, this is one of the most overlooked and interesting sci-fi/horror flicks of the Nineties. Laurence Fishburne leads the crew of a rescue vessel, sent to investigate the mysterious reappearance of the titular ship, which went walkabout during its maiden voyage to Proxima Centauri seven years before. After discovering the Horizon crew has been massacred the rescue team starts experiencing terrifying visions based on their own, traumatic past. Did the Event Horizon's engines, which create a black hole in which to travel across the universe, actually visit hell, and if so, what exactly did it bring back with it?

Top Of The Lake

Or “what Elizabeth Moss did after Mad Men”, this part-BBC financed procedural is the very definition of a slow burner. Returning to her New Zealand hometown where she was gang-raped in her teenage years, Moss is convincingly determined and stoic as Sydney Detective Robin Griffin, investigating the disappearance of a pregnant local 12-year-old. The cast of suspects is an incredible list of character actors including Lord Of The Rings' David Wenham as the head of the local plod, Peter Mullan as the town's crime boss and only let down by a shamefully overacting Holly Hunter as a bonkers, feminist lifestyle guru. Watch in preparation for season two, airing on the Beeb in 2016.

Canadian/American – bear with us – comedy horror film has well-meaning hillbillies Alan Tudyk (Firefly) and Tyler Labine (Reaper) as Tucker and Dale, whose ill-fated meeting with your clichéd group of hair tossing horror flick teens at a gas station ends with the teens convinced they are psychotic killers. The lumberjack-shirted boys have just bought a cabin in the woods for a holiday fixer upper so, of course, every teen interaction with our heroes is twisted into a terrifying, horror scenario. Various accidental deaths later and with Tucker and Dale trying their best to save the seemingly suicidal kids, the scene is set for a showdown in a saw mill and a twist at the end… John Dies at the End “Dark fantasy science fiction horror” is the best way we can describe this incredible thing. Like many before it, critics did a united “Wha?” and shrugged at this now inevitable cult classic. Hit up Wikipedia for the plot, it's too convoluted and improbable to recount here, but covers inter-dimensional travel, psychic Jamaican drug dealers, time travel and meat zombies. Interesting, funny, groundbreaking and definitely worth a punt of 99 minutes of your life.

Much Ado About Nothing

A progression of impromptu Shakespeare readings that Avengers director chap Joss Whedon used to hold in his Santa Monica home, this black and white production – shot over just 12 days, chez Whedon – should be pretentious, arch and ponderous. Instead, it's fresh, spiky and engaging. Starring a raft of historical Weddonites including Angel's Amy Acker and Alexis Denisof, Firefly's Nathan Fillion and The Avengers own Agent Coulson: Clark Gregg – this is essential Shakespeare. Shaddap. In a good, good way.