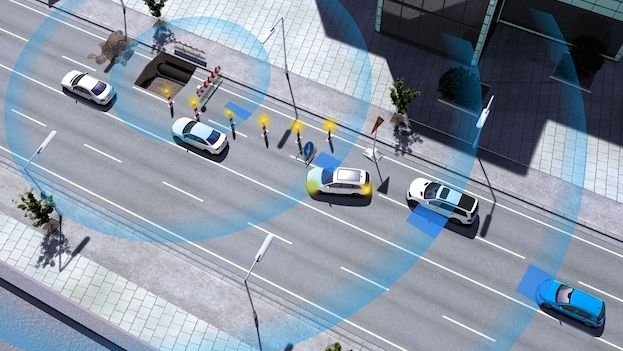 In the not-so distant future, you'll be soaking up the morning's news and gossip on the latest Apple product as the car you are travelling in glides around the city without so much as a single human input.

Traffic and accident reports will be beamed directly to the vehicle's advanced navigation system so jams are avoided, stopping at traffic lights will be a thing of the past and the grey skies above can be transformed into sunny scenes thanks to smart glass technology.

Our cities will be more connected than ever in a few years' time and car manufacturers are already well along the road to self-driving, smart-thinking vehicles that will take the strain out of the daily commute. Here is a collection of the most exciting...

Not only will the swooping LCD dashboard of upcoming Audis be a thing to behold, it will also attempt to ease the frustration that the constant stop/start of urban traffic light systems bring to the daily grind. Audi's latest in-car internet can connect to the traffic light network via the central traffic computer in each town or city. The computer then analyses the automated traffic light change sequence and advises the driver on the optimum speed to travel in order to roll through the next green sequence. If the driver is already stationary at a red light, the Driver Information System located in the central instrument cluster will count down the remaining time until a green light shows and interact with the vehicle's stop/start system for maximum fuel efficiency and minimum CO2 emissions. We're not sure how much the following vehicles will appreciate your crawling approach to traffic lights but Audi claims the new technology would reduce CO2 emissions by 15 per cent. Expect to see it rolled out on top of the range A8 models later this year before filtering down through the range.

Oh how we chuckled when Google revealed its autonomous vehicle. It looked like a Noddy car for a start and the large, rotating rooftop camera only added to the Toytown feel of the thing. But the giggles soon subsided when videos were released that showed real people enjoying a real autonomous driving experience on public roads. The vehicles work by harnessing various existing camera and radar technologies, which ensure the cars don't bump into things. A rear-mounted aerial also receives geo-location information from GPS satellites. Combine this weight of information and the vehicles can construct an accurate picture of the road ahead, as well as react to situations as they happen. For example, if a cyclist extends an arm, the vehicle knows this signifies that a change of direction is imminent, so it will slow down and prepare to alter it course or come to a stop. Google is very much still in testing phase, as tomes of legislation must be written before a driverless car can legally breeze around public roads but engineers have just revealed the cars will be able to speed up to 10mph over the legal imit. You know, because it's safer to keep up with fast-moving traffic rather than hold it up. It will be hilarious to watch the cars try and explain that to the police in the future.

The Swedish marque has already let five autonomous vehicles loose on the streets of Gothenburg in an attempt to iron out any driverless car issues prior to a slated 2017 release date but before then, we'll see examples of Car 2 Car Communication pop up throughout the range. The technology runs on a wireless network similar to WLAN and sees cars fitted with the technology linked together so they can exchange vital information. The instillation of transmitters in road furniture (see part 2 here) will also mean the vehicles can also effectively communicate with their surroundings. But what is the benefit? Well, future Volvos will be able to breeze through traffic lights in a similar way to the aforementioned forthcoming Audis, be alerted to the presence of nearby emergency vehicles, receive notification of vulnerable road users, such as cyclists and motorcyclists, and locate broken down vehicles or other road blockages in order to re-route and avoid tailbacks. A Car 2 Car Consortium, which is made up of a number of European car manufacturers, is already working on a common platform so the majority of future cars on our roads will effectively talk to each other and swap info.

Beneath the futuristic styling of recently unveiled Land Rover Discovery Vision concept car sits a plethora of brilliantly connected technology that will not only make our journeys safer and easier but also a hell of a lot more entertaining. Most of the glass surfaces - bar the windscreen, obviously - are fitted with smart glass technology, which can interact with the world around it to throw up trivia about nearby landmarks, display route information and even project images. One of the uses suggested by Dr Wolfgang Epple, Director of Research and Technology at Jaguar Land Rover, is for the smart glass panoramic sunroof to display images of tropical sunshine when it's raining or phase into beautiful constellations at night. The technology, dubbed Radical Human Machine Interface, is designed to transform any glass surface into a smartphone or tablet, meaning occupants can while away the hours browsing Wikipedia or checking emails while on the move. It will certainly come in handy should Land Rover opt to go down the autonomous route, because if it does, we're all going to have a lot more time on our hands.

Audi has opted for a slightly different direction when approaching the whole autonomous driving issue in so much as it doesn't want to replace the driver completely, rather take the monotony out of the everyday grind. Radar, GPS and computer technology fitted to its A7 model last year showed exactly what we can expect from future models, including Adaptive Cruise Control that uses 30 sensors around the car to keep it in lane and on course, as well as an advanced navigation system that keeps the car at the legal limit for road it is travelling on. Traffic Jam Pilot is the big talking point as it can take over from the driver during the dull, stop/start traffic experienced on most roads during rush hour. At speeds of up to 40mph, the big A7 can steer, brake and control speed without any input from the driver. Should the worst happen, the tech heavy A7 can also sense when an impact is imminent, close the windows and tighten the seatbelts in preparation for a prang.