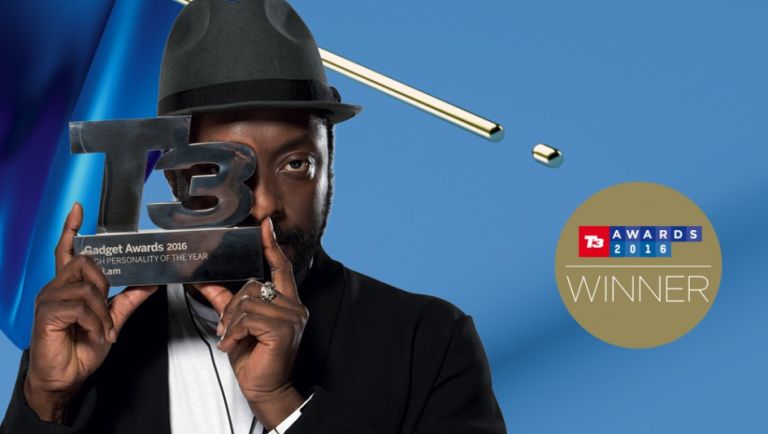 Chart maestro with The Black Eyed Peas, judge on ITV's The Voice, and founder of his own tech company… will.i.am is the man who has it all. But does he have a T3 Award? He does now!

Black Eyed Peas founder member will.i.am (born William Adams) is a musician, a philanthropist,
a tech entrepreneur, a TV host/mentor on ITV's The Voice, and also a website – type his name into your browser and you'll see what we mean.

In recent years, as well as releasing records and judging singers, Will has been putting some boom-boom-pow into tech, with some typically offbeat wearables (the most recent one, Dial, is available exclusively via the 3 network), not to mention the EPs, which are, quite literally, “earphones for the dope”.

An audibly delighted Will spoke to T3 about his award. Unfortunately, it was via possibly the worst phone line ever used for an interview in the history of journalism. Isn't technology marvellous? Fortunately, Will is a man with a lot to say, and even when half of it is inaudible or obliterated by static, that still leaves easily enough to fill several pages of a magazine.

T3: How does it feel to win the T3 Tech Personality of the Year award?

will.i.am: It's awesome because I come from an area where kids don't grow up wanting to be involved in that kind of creativity. They don't necessarily think there's anyone they can relate to based on their upbringing. Who in the world of tech comes from that kind of urban upbringing?

Kids from those environments grow up wanting to be actors or sports stars or, sure, doctors or lawyers. Every once in a while, you get a dentist or a policeman. But, “I want to develop an OS or an app,” you don't hear that.

So I think it's really great, and I'm honoured, because of what it represents for those kids, giving inspiration for that new type of creativity.

T3: Who or what was your first tech influence?

T3: Do you remember which model it was? An iMac?

T3: Did you have any techy toys before that?

will.i.am: This was the early Eighties, so computer games didn't really exist. The first one was, like, the Atari in 1983 [it was 1977, but let's not split hairs – Ed]. I guess my first real interest was when I began to make music on a computer in the early Nineties. It was on a Sony at first; that's how I learned. Then I moved to Macs, which I've always used since. Mainly because I'd used Apple PCs at school, so I knew all the shortcuts. I had a fascination with that; being able to use a computer to do what I want to do, to make music.

T3: Did you use drum machines and synths before you started on computers?

will.i.am: I used an Akai MPC2000 [a legendary sampler/drum machine much used in old-school hip-hop and techno]; I learned on that. But I say that my instrument is the computer, you know?I play a computer.

will.i.am: [Extremely long pause followed by static and beeping noises] On the MacBook Pro, I use Pro Tools. The coolest thing, though… I did a solo tour playing arenas. The Black Eyed Peas, we'd been playing 60,000-seat places, but this was more like 20,000. So my music director was, like, “Yo, what are we doing about a band?” I was, like, “I don't want to be one Pea with the same band. I'm not gonna go out there and have the same musical configuration.” He said, “So what are you gonna do?” I said, “I'm gonna go out and rock the show with my iPad. I'm gonna put all my beats on [music creation/remixing app] Figure, and do the show on my iPad.” And lo and behold, the crowd went crazy for it. I've got these freaking songs – because the software is just insane – and rocked 16,000 people with just me and my iPad, just jamming and improvising. It was sick.

T3: What tech has revolutionised the world the most in your lifetime?

will.i.am: Capacitive touch. Say, for example, it's 2005. You're a developer, you develop software programs for macOS, Linux, Windows. In 1995, you wrote programs for DOS, Unix and whatever other languages. In 2008, the world changed. Before, you used a computer with a joystick, a mouse, a trackpad, a keyboard. Capacitive touch says, “No! You can just use your finger!” It's intelligent, predictive. That changed how we go out in the world. Now we have mobile computers that are so powerful. It changed how we interact with machines.

T3: Touchscreens are the key element of smartphones for you?

will.i.am: Of course, you need processors, chips, transmitters… But it's the touchscreen that's given us that exponential growth where, now, everyone has a computer in their pocket. And the exponential growth in developers that's come from that. Capacitive touch led to Uber, Airbnb… It's changed travel, business, education, baking. It's changed the whole freaking world! A child comes out of the womb now, and by a year old it knows how to use these devices, because of capacitive touch. They don't need to learn typing. And now the next one is coming around the corner…

T3: What's the next one coming around the corner?

T3: Do you think voice control will be the next big thing?

will.i.am: Right now, voice control is the reason we DON'T talk to our phones. It's not like talking to a person. What's coming around the corner is conversational computing. The way I'm talking toyou is how I'll talk to the machine. Get stuff done, and education, just through having a conversation. I've got voice control on a BlackBerry Bold. It's not new. Devices that have a personality and can learn like a human. That's coming. It's a new paradigm.

T3: So you think it'll be like the film Her?

will.i.am: It'll be a new age – kind of like going from BC to AD. The reason we call it “artificial intelligence” is because we're thinking back to a time when machines weren't intelligent. There will be a new generation that'll come, that'll just see it as “intelligence”. It'll become the norm.

T3: Could an AI write songs good enough to put you out of business?

And you know, America blossomed in the space race because it was competing with the Russian programme. We need something to compete with.

T3: What tech have you been most into over the last year?

T3: What about stuff that's on the shelves now, like drones?

will.i.am: They're cool but I don't see what I'm gonna do with them in my daily life. I use my phone every day.

will.i.am: VR is cool but it feels a bit like PDAs or MP3 players in 2001. It's seven years before the iPhone comes. So it's not everywhere, only a few people have it. I don't want to say negative things about VR and dash it, though – it's cool. I actually think Google Glass could've been great, but people don't have the patience to grow these things. We love tech but we don't really value it for what it is.

It's like when radio was invented – they were looking to put things on it, so they put on concerts or theatre plays. But then later, people started to make songs and shows just for the radio. Let's make a new paradigm. Let's not just use VR for gaming; let's use it for life, for storytelling. The artists need to come along and do awesome shit with the new technology. Like always.

The Black Eyed Peas' latest single, #WHERESTHELOVE, ft. The World is out now on iTunes