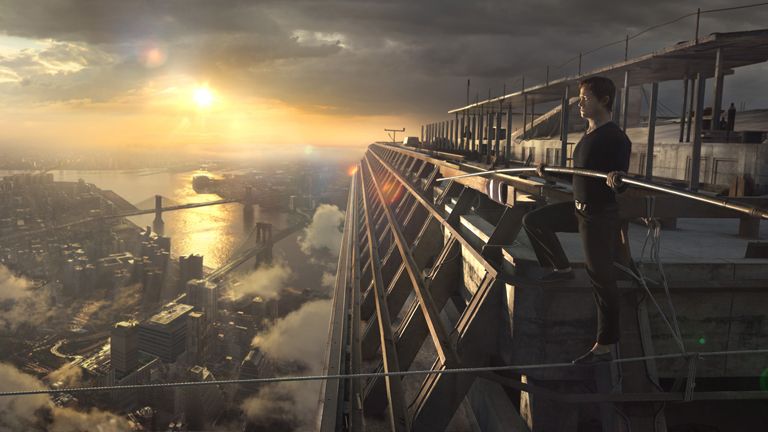 The Walk starring Joseph Gordon-Levitt retells the dramatic real event of when French high-wire artist Philippe Petit walked between the two towers of the World Trade Center in 1974. Here T3 spoke to Kevin Baillie, the VFX master on the film, about how his team used some amazing technology to create some of the most stunning digital illusions ever seen on film.

T3: What was the flat out coolest thing you did on The Walk?

Kevin Baillie: The flat out coolest thing we did on the film was related to Joseph Gordon-Levitt's wire walking. He'd trained for eight days before the shoot with the real Philippe Petit to learn how to do wire walking and did in fact learn how to wire walk and continued doing it all the way through the production process. So there are a few shots where Joseph Gordon-Levitt is actually walking the wire. And there are a few more shots where we actually built this 20 foot long steel plank with a groove down the middle that we could bring in below the wire and raise up so it would support the wire and be there for the sides of Joseph's feet when he needed just a little bit of help. It was like training wheels for wire walking. So in all those scenes it is actually Joseph up there on the wire.

However, there were some scenes which were just way too complicated for him to do on his own. So like lying down on the wire, kneeling on the wire - the type of ballet that Petit actually did himself. So for those scenes we had a stunt performer stand in for Joseph who had trained with the Cirque du Soleil and is an amazingly talented wire performer. He was a perfect stand in however there were a lot of scenes where we saw his face, which doesn't work. So how did we fix this? We created a completely digital version of Joseph Gordon-Levitt's face! The face needed to replicate the very subtle performance that Joseph gave while on the wire himself and in total there were 37 shots in the film, some of them very long, where the digital face was used with the stunt performer. The audience though had to totally believe that it was all Joseph on the wire at all times and, as you spend all day everyday looking at people's faces, it's very easy for people to spot if something is wrong with them. It's intuitive. So far, from all the screenings people had seen, no one has yet been able to pick out which shots are the digital Joseph and which shots are not. So I think we did a great job!

T3: Speaking of which, could you talk a little about who you are and what your role was on the film's VFX team?

KB: I was the visual effects supervisor on The Walk and also own the lead visual effects company that worked on the film, Atomic Fiction. In total we had four visual effects companies working on the movie and Atomic Fiction did all of the third act of the film, so the walk between the towers and the recreation of 1974 New York. We also had Rodeo Effects in Montreal, who did a lot of the ground level material. We shot everything in Montreal and turned ground level Montreal into 1974 Manhattan as seen from the ground. Another VFX company in Prague did all of the Paris-based scenes too, so they were turning Montreal into Paris, and finally we had one more studio who were responsible for transforming the film into 3D, as it was shot in 2D. So my job was to supervise all of them as well as working closely with my company, Atomic Fiction.

T3: How large was the VFX team personnel-wise, across all studios, on The Walk?

KB: Including the crew that did the 3D conversion on the film, and with 3D conversion it's like turning every shot into a visual effect, I think there was between 500-600 people working on the film.

T3: Can you talk about Conductor? What does this technology allow you to do and why is it superior to other systems you have worked on?

KB: Conductor essentially allows artists to use cloud computing in an advantageous way. Most companies have locally built data centres, which are full of hot, power hungry computers - that's the traditional model. And in the traditional model an artist will give their own company's data centre things for it to do in the background and then move onto the next task while they wait for the computers to do their thing. It's a really expensive proposition for a visual effects studio to build and maintain these data centres because as a team's workload gets bigger and smaller, or when they are between projects, the data centre's size remains the same. Economically it's not very efficient.

Whereas what Conductor allows artists to do is the exact same thing, so offload their computer intensive processes so they can move on and just focus on being artists, however the processing is handled by cloud computing instead. Conductor doesn't use a physical data centre but a virtual one. As such, when the workload of the artists shrinks or grows, the demands from the cloud-based data centre shrinks or grows in sync. So if the team is busy you may have 1,000 computers humming away in the background doing their bidding, however when everyone is at home having dinner or they are between projects, there is a fraction of that number operating. That is a big deal as it delivers resources to artists when they need them but then they don't have to be burdened with them when there is no need. The system scales to suit the artists' needs.

KB: Sure. So on The Walk, for example, we were really challenged in terms of budget. The film only had $34 million to play with to shoot the entire thing, which is less than the visual effects budget alone of many other blockbuster movies. We had very, very tight resources. So by really developing and using Conductor, to the extent that the system can scale up to 30,000 processors at a time if needed and then right back down to 0 in a matter of minutes, we managed to save 50 per cent of the cost than if we had been working in the traditional, physical data centre model.

T3: Did Conductor help the VFX teams creatively while working on The Walk?

KB: Yes. One of the normal things that happens when you're working within a visual effects workflow and using traditional, locally situated render farms, is that when the artists submit what they have been working on they may have to wait multiple days or even a week to see the results. So say a VFX artist moved the position of a light in the computer and changed the material of the surrounding area so it is less shiny, for example. They would then hit a button to send it to the render farm for processing and, as things easily get stacked up and bottlenecked with a fixed farm, they could then have to wait a day or more to see the result of those small and quick changes. They would then come back to it when it is finally done and, in some cases, struggle to even remember what they did to affect those changes in the first place, as they have since moved onto other work areas. By using Conductor on The Walk though, as it could scale up to so many processors so fast, the artists got those sort of changes back in hours rather than days, allowing for their ideas to remain fresh in their heads and creating a more natural flow for their creativity.

That was really important on The Walk, as from the first moment that Joseph Gordon-Levitt steps out onto the wire right through to the end of his walk, it goes from early morning pre-sunrise all the way through to the afternoon and the lighting is constantly changing. For artists to be able to craft that lighting shot by shot, so it is like a character itself and point of reference for the audience, it demanded that type of fast turnaround and that is what Conductor gave us.

T3: What was the key creative challenge for the VFX team?

KB: The biggest creative challenge on The Walk, from a technical perspective, was rebuilding 1970s New York. We built out a 12-block radius from the World Trade Center and it was a massive amount of work to undertake, especially considering we were using these grainy old photographs from the 70s, to make it look genuine. We have had people come up to us though and say that they were up on the towers just after they were finished and that they looked just like they do in the film, so that was hugely gratifying for us to hear.

The towers themselves were a really creative challenge for us. Robert Zemeckis, the film's director, said to us that he wanted the towers to be a supporting character in the film. Now, we had perfect blueprints of the two towers available to us, so we could digitally build them perfectly, however the problem is that when you build things perfectly in the computer it look fake. It looks fake because that is the architect's dream of the building, but in reality there are always deviations from the ideal. For example, different metal panels might come out of different foundries, or maybe they sat outside for different periods of time prior to been installed, or maybe different workers had varying skill levels when installing them and the result of these factors is repeated, albeit minor, differences in colour, positioning and wear to the structure. So the challenge for us was to incorporate these minor differences over the entire building as it is those imperfections that makes the structures look real. Finding that 'just right' amount of imperfection to add to the buildings was absolutely key.

The Walk is out next Monday, 1st February, on Blu-ray, 3D Blu-ray and DVD. For a closer look at the awesome VFX on display in the film then check out the trailer below.