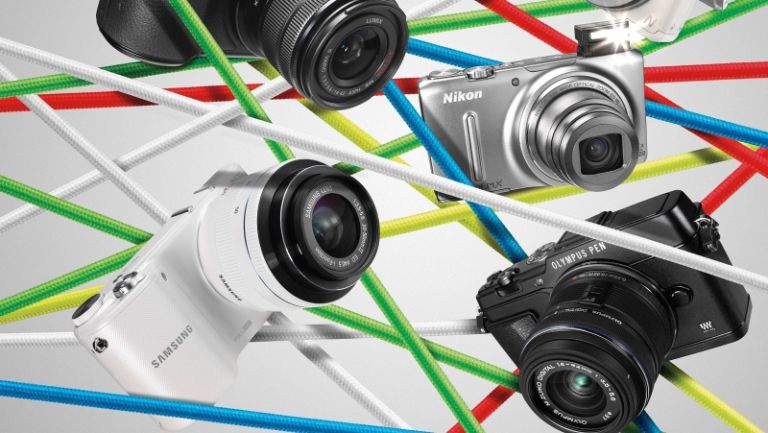 The camera is changing fast and a few years from now, your snaps will be unrecognisable from those of today. With camera phones able to shoot super shots, the role of the dedicated camera is shifting, and opening up huge new opportunities for keen snappers.

It's undeniably an exciting time for photographers, as cameras get smaller, more capable and – most importantly – more affordable. Despite the market being flush with the best camera phones, the dedicated snapper is still holding its own.

And these important developments aren't restricted to the traditional interchangeable lens models. There are now more options for serious photographers who want to use a smaller, lighter camera, or make use of some of the new features.

The iPhone 5S remains the world's most popular camera, and companies like Nokia to continue to challenge our notions of what's suitable kit, introducing its 41-megapixel Nokia Lumia 1020 cameraphone.

This fierce competition is killing the compact camera market and really forcing the big brands in the photo industry to rethink what they do. Some have responded with new offerings rich in features that camera phones can't provide, such as bigger sensors, direct controls and long zoom ranges. But is it working?

Time will tell. Photography is in the midst of a period of great change, but there are a few truths we can divine from our crystal ball. Below is our list of what we believe photographers can expect to see more of in the coming years.

Everyone by now is familiar with the traditional panoramic image. Most compact cameras worth their salt offer a Panoramic mode that involves you swinging the camera back and forth like an ape discovering a suitcase in its cage.

But what happens if you keep on shooting until you end up back where you started? This hugely popular technique is called a 'polar panorama' and is used to create seemingly 360-degree pictures of a scene.

Typically you can only view a polar panorama in a special web browser using software plug-ins as virtual environments. However, it is possible to join up a 360-degree picture to create a two-dimensional polar panorama using advanced photo editing tools like Photoshop's Polar Coordinates filter, which joins up both edges of a picture to 'close the circle'.

High-speed photography is a technique that has traditionally required a great deal of preparation, precision and patience from photographers. This is because, more than any other niche, high-speed photography serves up a number of technical challenges, particularly when it comes to timing.

But advances in camera technology are helping to remove some of the trial and error high-speed photographers have had to endure.

Improved burst modes, like the just-announced Nikon 1 V3's staggering 20 frames per second, make any fleeting phenomenon fair game for photographers. And in the near future we can expect photographers to be filming video on cheap 8K cameras and simply pulling still images at the opportune times.

Cameras that measure in gigapixels

What is gigapixel photography? It's part of a growing trend in this age of cheaper full-frame and larger sensor cameras where photographers who must not have jobs, nor kids, or any sort of responsibility to distract them, spend months shooting tens of thousands of frames within a scene, and then spend another period of months chained to their computers stitching them together. Why would someone do this? Because gigapixel photos are AWESOME!

The best gigapixel scenes will be wide vistas with large crowds, such as an urban setting. The photographer will then use a long lens to get thousands of detailed, close-up views of this scene, which you can then zoom into once stitched together and laugh at the way people walk. It's a genre for only the most committed photographers, but a consumer gigapixel camera is said to be just five years away from hitting the market.

Check out our list of the best gigapixel photos

Despite the best efforts of desperate photographers fiddling with their software's sharpening tools, the one universal truth of photography has always been that the focus point of your images is set at the point of capture. That is, until the Lytro came along.

The Lytro Light Field Camera changed everything, allowing photographers to change the focus point after an image is captured. Simply touch different sections of your image and marvel as the image refocuses before your eyes.

Lytro has achieved this feat by fitting a microlens array in front of the Light Field Camera's sensor to scatter light exiting the lens in different directions depending upon the angle at which it hit the array. The camera then uses this information to calculate how the light would have responded if the photographer had focused from a different distance.

However, the idea of retrospective focussing is spreading, and the Samsung Galaxy S5 is the first phone to capitalise on the idea of improving your shots after you've taken them. Expect to see more manufacturers following suit over the coming year.

Cameras that tell you where to stand

One way the big camera manufacturers have tried to stave off the assault of smartphones has been to introduce Wi-Fi-enabled cameras into their compact camera – and now DSLR – ranges. Take your picture with your 'proper camera' and share it to Facebook or Flickr. The problem is you still need a smartphone to do it.

While needing a smartphone to serve as a middleman, so to speak, seems to negate the advertised convenience of having a Wi-Fi-capable camera, we believe in a few years' time this technology really will start coming into its own. How?

Let's say you visit New York or Paris and want to know where you can take some great pictures. An app on your Wi-Fi-enabled camera will soon download information about these cities to your camera and tell you where to go to get the best pictures – even where to stand for the best angles. You'll probably also find tutorials explaining in simple step-by-step form how to achieve the shots you want to take.

Read our guide to the best digital cameras

Cameras that finally fit in your pocket

While there is undoubtedly still some life left in the DSLR, by the end of this decade there will be fewer and fewer reasons to buy one. The answer is simply because the most exciting innovations in camera technology are coming from manufacturers of compact system cameras.

The likes of Olympus and Panasonic have produced EVFs that already challenge traditional optical viewfinders for clarity. And Olympus's AF system performance, in particular, is one of the fastest and most accurate on the market.

Autofocus on the average compact system camera is already fast enough for most photographers in daylight – once manufacturers crack how to improve their performance in low light... it's lights out for DSLRs. Or, rather, DSLRs will soon go the way of rangefinders, serving a very niche market.

Read our guide to the best mirrorless camera