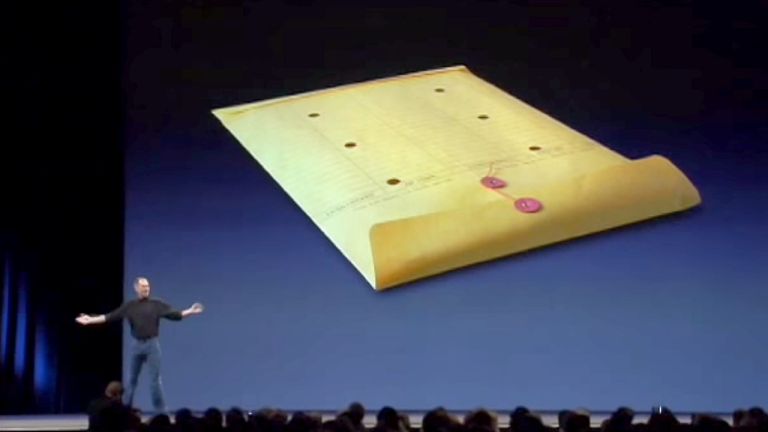 T3 shone a light in the eyes of passing journalists and interrogated them about the greatest Apple keynote moments. We got a broad range of answers, and also discovered the location of Van Gogh's 'Cracked Vase with the Big Daisies'. Read on to discover the product announcements that made seasoned tech-watchers weak at the knees…

The first time is always the best, so they say, and the original iPhone announcement was certainly quite something. As weird as it now seems, they really did launch a load of other stuff at the event before moving on to “One more thing…” Which was the iPhone as it turned out, though as I recall, they presented it as a sort of music-player-computer-phone. Steve Jobs really became STEVE JOBS that day, explaining the new device's features with his trademark manner, somewhere between patient-but-strict school teacher and door-to-door Jehovah's Witness. Demonstrating that new tech products aren't always immediately appreciated, the general reaction in the office was, “Why hasn't it got 3G? Rubbish.” In fact, we even wrote a few articles to that effect. Then, when the review unit actually turned up the collective view became more along the lines of, “This is awesome.”

Two words; Scarf Guy. Apple's iPhone 6 announcement was a bit of an anti-climax, not that the phones it launched were bad - far from it in fact - but because pretty much every single detail about the iPhone 6 and 6 Plus had been mercilessly leaked in the preceding months.

Enter Tommy Krul. Co-founder and CTO of gaming company Super Evil Megacorp, who took to the stage with his colleague to demo a mobile game on the shiny new iPhone 6. Thing is, Tommy was wearing a rather fetching purple scarf, inside, under stage lights.

Unsurprisingly, the social networks instantly lit up with love for Tommy. Memes were generated, Twitter accounts started (check out @purpleScarfGuy and @KeynoteScarf) and the iPhone 6 launch was saved.

I salute you, Scarf Guy.

What, I'm the only person who liked U2's 'Songs of Innocence'? I jest! For me, the original iPad launch was a fantastic event. Even as it struggles to keep up the sales pace, I have a soft spot for the iPad – it was one of the earlier tech launches I was involved in and I felt it marked a notable shift towards what I (as a child) had expected from futuristic technology. A handheld touchscreen computer, with access to all the world's books, movies, websites, songs, before even considering its messaging capabilities? We take these things for granted now, but it really is still an incredible achievement. Yes, that praise extends to all the other manufacturers and developers that make mobile computing possible, but Apple is still the best company at selling the dream. Sure, it was kind of just a giant iPod Touch, but for me personally it felt like the start of the Star Trek age of consumer technology.

At MacWorld 2008. most of Apple's announcements focused on entertainment and software – not exactly what a baying crowd of aluminium-hungry tech junkies is after. But towards the end of the conference, Steve Jobs revealed what he had up his sleeve – or rather, what he had in the manilla envelope. After showing the crowd the dimensions and name of the new machine, he told them it could fit inside a standard document envelope, then picked up one that had been sitting on the desk at the side of the stage the whole time, and slid the MacBook Air out. It was a bit on the ridiculous side looking back – for all of Jobs' showmanship, we were still talking about hiding a laptop inside office stationery – but it was such a cool reveal at the time.

Trying to pick a favourite Apple launch event is difficult. I guess, ultimately, it has to come down to which Apple product has genuinely improved my life. That means I'm in the iPad camp, harking way back to 2011 and the iPad 2. Interestingly, it's a device that I never even owned. So why the iPad 2? Well, for starters, I was fresh out of uni and still working in a pub, so that was the last Apple launch I wouldn't be required to cover! But the iPad 2 was also the device that turned my Mum from a technophobe into... someone who could turn on an iPad, tap a screen, surf the web and send some emails. Which doesn't sound like a lot, but it meant I was downgraded from full-time IT support to a zero-hours contract pretty much overnight. My story, I suspect, is a familiar one: the iPad, in all its wondrous simplicity, made computing accessible to more people than ever before, and changed the way many of perceived computers. That was also the year of the iPhone 4S - coincidentally, the first iPhone I did own, so I'm sticking with the 2011 Cupertino cookout.

As this will be the eighth year covering Apple keynotes, any show that has only one big device is fine by me - I've spent too many late nights filing copy about Apple's many releases, give us poor journalists a break!

On a more serious note, it had to be the Apple Maps fiasco and Antenna-gate for me. Apple is such a brilliant, awesome company that rarely does anything wrong that it was good to see the company admit it too has fallibilities. Like when your favourite film star is spotted with a rather big spot. Although let's have no more U2 forced upon us. Seriously, that was one step too far.

Liked this? Check out all the latest on the iPhone 6S and Apple TV