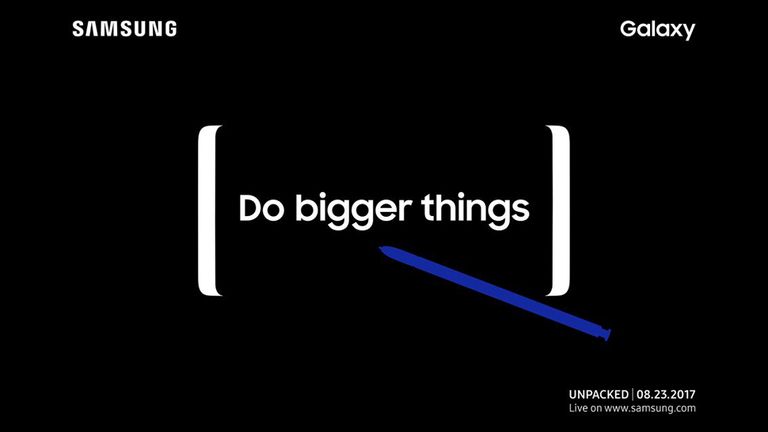 We know we're getting a new Samsung Galaxy Note because Samsung is having an event next Wednesday entitled 'Do Bigger Things'. So here's what we know so far.

The new Samsung Galaxy Note has a tough job to do. Its predecessor was infamously flammable, leading to a recall and cancellation that’s believed to have cost Samsung more than $17 billion.

It did significant damage to the Samsung brand, too, with the Note 7 joining shoddy hoverboards in US airlines’ no-fly list. Will the Note 8 repair the financial and reputational damage?

It’s probably safe to assume that the Note 8 won’t have the same issues - we hear the battery is smaller this time, Samsung playing it safe even though the phone, hoping that pundits will eventually tire of making fiery jokes (sorry).

But the biggest challenge for the Note 8 isn’t Samsung’s reputation or the imminent OLED iPhone 8. It’s the Samsung Galaxy 8 Plus.

That really depends on what you want from a phone or phablet, because the basic specs of each device are very similar.

The Note 8 is expected to have the same chipset as the Galaxy 8 Plus, albeit with more RAM: 6GB compared to 4GB, with an extra 2GB in a special “Emperor” edition for the Chinese market. Both devices run Android Nougat 7.1.1, but will be upgradeable to Android O. Both devices have Bixby, Samsung’s rival to Cortana, Siri and Alexa. Both displays have HDR for more arresting images.

Despite the bigger screen and higher pixel count, the Note 8’s battery is smaller than the one in the Galaxy S8 Plus: where the Plus gets 3,500mAh, we hear the Note 8 makes do with 3,300mAh. It’ll be interesting to see how that affects battery life, the Achilles Heel of larger phones and phablets.

That means it captures more light and can be used to create more SLR-esque portraits. And of course the S Pen is what differentiates the Note from other Galaxy devices, enabling annotation, note-taking and precise navigation.

This is a call

The Note 8 is really a Galaxy S8 Plus Plus: it ups the resolution, adds an even better camera and throws in the S-Pen too. If predicted prices are correct then the cost is likely to put a lot of people off and send them to the Galaxy S8 Plus instead, but we suspect the Note 8 isn’t about selling in huge quantities: it’s a planted flag, a declaration of intent, a return to business as usual after the Note 7 battery debacle.

In a month’s time Apple is expected to unveil the iPhone 8, a device widely expected to have the OLED display and wireless charging Samsung users have had for ages. And just as Apple catches up, Samsung is pushing the technology even further.

The Note 8 is Samsung reclaiming its crown as the maker of the world’s most advanced smartphones.