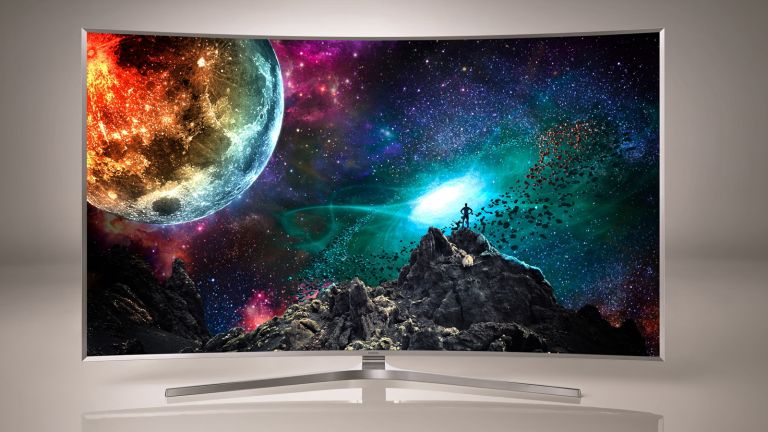 At least that's what it's set to become as the second age of digital rolls around; an age where everything and everyone is connected. It's a term Samsung UK President, Andrew Griffiths, uses a lot as we discuss his hopes for local domination.

Samsung wants to get your home talking. Ideally to Samsung products, but also to anything else you want to plug into your residence.

The sun is shining outside of its Surrey offices and the seemingly ever-enthusiastic Griffiths is excitedly explaining how the Korean giant is going to grow the connected home market.

And how the open nature of its approach, and specifically its acquired SmartThings tech, is good for the entire connected home industry as a whole. And, perhaps even more interestingly, how the UK is set to play a pivotal global role in this new world.

“The connected home, the Internet of Things, is not a thing of the future,” starts Griffiths. “It is with us, and around us today. What we've got to do is realise its potential and build on its capabilities towards the full lifestyle.”

The 'full lifestyle' is this sort of Grand Designs, show-home kind of vision. It's a vision I'm shown on a huge, wall-mounted TV in Griffith's office.

It's a lifestyle where your curtains gently open at a certain time in the morning because it knows you need to get up. Where the kettle in your kitchen starts boiling water for a morning cuppa as it senses you moving around upstairs. Where your garage opens and your electric BMW starts up, rolling around to the front of your home idyl as you head for the door.

But we all know that's unlikely to be the reality for most of us and thankfully that's something Samsung is acutely aware of too.

Griffiths is expecting people to take a more modular approach to their own connected home ideal.

“We think they'll digest it piece-by-piece,” he says. “People will find their own personal space that means something to them. We think it's something you'll grow into progressively.”

And with the SmartThings technology it acquired last year it's now got a great open platform to really grow the connected home market as a whole. The Californian company may be wholly owned by Samsung, but it sees huge value in letting it continue from it's open-sourced beginnings.

The SmartThings platform provides a bridge between different company's products, allowing them to communicate with each other in a connected home context.

“[SmartThings] works very independently from Samsung, that feeds much more openly into the connected home dream,” he explains. “So it supports all of the software protocols and packages from our key competitors and supports that because it's an open platform.

We believe Samsung has a great opportunity with our portfolio and we should get a very good share of that market opportunity. But we understand that people have, or want to use, other products.”

With this we're moving away from a situation where manufacturers were desperate to ring-fence their products to try to completely own the connected home.

That time has passed and the future is certainly looking a more open place in a technological sense and that's something Samsung sees as integral to keeping this second age of digital rolling along.

We're still in a rather formative stage though and Samsung has identified three key areas to target right now: security, energy and entertainment.

The security aspect is something that's been key to the burgeoning notion of the connected home for years, even before the phrase was coined. That idea of having your burglar alarm connected to a remote station which calls it in for you if you're not around is an old one. But it's going to now become a more personal setup too, with the likes of connected peep holes which email you a picture of the person who's just rung your doorbell.

Griffiths tells the story of a Samsung employee whose home security camera allowed him to see exactly what his cleaner got up to, and when, via push notifications on his smartphone.

On the energy side services like Nest, HeatSmart and Tado are offering smart home heating solutions which are IoT-capable devices and learn your habits in order to save you money with a tailored, personalised approach.

But it's not just about the final dividends of these devices, it's also about the level of information they're getting about their daily usage and what that means. In these ecologically troubling times that's very much a key concern for a lot of people.

“Heating, lighting, the understanding of how much energy you're using and how efficient the use is. People are going to be able to tap into far more information,” explains Griffiths. “It's even more personalised and even more relevant.”

But it's also about this relevant information being presented in manageable and understandable forms, unlike the obfuscating energy bills we receive from our suppliers.

“You are in charge of the data. We think you'll set up your own personal dimensions of things.”

Then there's the more fun, entertainment side of the connected home. A place where all your entertainment is available on any device and any portal.

“Bringing the music and your gaming and your video content together,” says Griffiths enthusiastically, “that whole thing becomes so much more intuitive around the house and so much more powerful in the Internet of Things age.

Physical media is obviously more old-fashioned these days, you don't download media as much even - I can't remember the last time I did it - it's all about streaming.

Again, these are not visions of the future, this is all easily realisable today.

Every company with even a vague interest in producing audio products is shipping multi-room devices – audio equipment designed to throw your music all around your house, either from a central hub or at the touch of a smartphone screen.

But whether people will want to go down the route of hitting all three of these target categories in their own home is still unknown. And these aren't the only spaces where the connected home is going to grow – there will be places IoT devices find a place for themselves we don't even understand yet.

It comes back around to the idea of taking which parts of this burgeoning industry make sense for you; personalising it, tailoring it to your own needs.

But, as Griffiths explains, once you've dipped your toes into the connected waters you'll be far more open to expanding your personal network.

“Once you've had dimension one and maybe two, you'll be keen and more open-minded to three and four. We think you'll see quite a different world by 2020.”

Link in the chain

And with Samsung manufacturing over 660 million devices a year - even more this year – it's got a good chance of being somewhere in that connected chain in your home.

“All these devices are going into the home, a lot of them are going to be IoT capable,” Griffiths explains. “All of our TVs, all of those lovely SUHD screens, will be internet connected by 2017. We've made that commitment.

You should get a clue there about how your TV can serve as a hub. And that screen there, that big screen there,” he gestures to the enormous Samsung TV on his office wall which had been playing its utopian vision of a connected future, “is waiting to be unleashed on the connected home. Essentially a TV will do more and more. It solidifies its position as the home hub.”

It's only a short hop from where we are now to your connected TV popping up a message in the middle of Eastenders to tell you that your connected washing machine has finished its cycle and you ought to hang it out before it goes mouldy.

And then another reminding you to get some more milk because the connected fridge has just checked how little is left.

And yet another explaining your car might not have enough power left in its batteries to get you to work in the morning and you should really have plugged it in when you got home.

Thankfully this somewhat frustrating vision of a future where your domestic appliances become a nagging nuisance in your life is not lost on Samsung either. But Griffiths believes the onus is going to be on you to ensure that vision doesn't become a reality.

“I think you are going to have a world where instead of going around the house switching things on you're going to be going around switching them off. Because it will otherwise go on all around you. It's this whole sense of this constructed world that you've set up to do what you want it to do...unless you don't.”

But where do we fit into all this?

Samsung's mother country, South Korea, is one of the most connected countries in the world. It's had smart washing machines for years, for example, connected to the ever-strained electricity grid to ascertain when there is lowest demand before starting a cycle.

Griffiths though is looking to the United Kingdom to be a leading light in this second age of digital.

“The UK is a crucial market for the global tech market because we are early adopters,” he explains. “We are technology curious. We're the first markets to mature in areas like smartphones or large screen TVs.

We have the highest spend per capita on technology of any country in Europe. We're very closely aligned to US markets in terms of our energy and our natural interest in the tech business.”

That's why he sees the UK as the perfect place for Samsung to push greater penetration of the connected home, to trial it's latest tech and see what works and what doesn't.

With our voracious tech appetite we are perfectly positioned to be the guinea pigs of this latest push.

“This is a great area for us, and we're encouraging our friends in South Korea, and our friends in California, to launch with us,” says Griffiths. “Let go with the UK first and show what appetite there is, what works, how we learn from these things in the early days, and adjust and adopt.

I want the UK market to be a beacon market for the world.”

And, after spending some time with the effusive Andrew Griffiths, so do I.