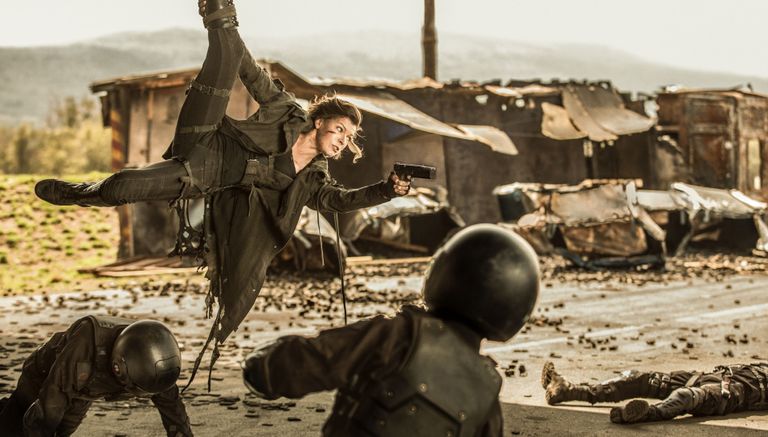 Resident Evil: The Final Chapter, now available on Blu-ray and DVD, is the last instalment in the best-selling video game-based movie franchise. Picking up where Resident Evil: Retribution ended, in The Final Chapter humanity is facing total annihilation and Alice (Milla Jovovich) must return to Raccoon City to stop the Umbrella Corporation before they deliver the final strike against the last remaining survivors of the apocalypse. Cue new allies, new mutants and more zombies than Resident Evil has seen before. Here we speak with Dennis Berardi, one of the visual effects supervisors on the film, to find out how he and his team brought the zombie-fuelled carnage to life one last time.

You were a VFX supervisor for Resident Evil: The Final Chapter. What did your role entail?

“I was the supervising visual effects supervisor, if you will, and I couldn’t have done it without my team. Our primary role is to translate the director’s vision into visuals that move the story forward. Paul W. S. Anderson is a visually-driven director. With Resident Evil, everything is driven by Alice’s story, of course, but the visual effects component is also one of the stars. Paul embraces that.”

Your company, Mr X, has worked on every Resident Evil movie apart from the first. Was there added pressure with The Final Chapter because it’s the last?

“The stakes seemed higher. Paul wanted the film to be a retrospective of the franchise but to also break new ground. In terms of visual requirements, The Final Chapter became one of the biggest films I’ve worked on. There were over 2,000 VFX shots and around 75 minutes of the movie was either enhanced from live action footage or created digitally at Mr X. It was daunting but we knew the material and had over 300 motivated artists who wanted to finish the franchise with an exclamation mark. We also had a director who believed in us.”

What technology did you use for the visual effects work?

“We knew early on that we had to have a digital double of every environment and actor, and we had all-digital creatures, too, so we employed lidar technology to scan each set, prop and location, then recreated them digitally. We also created a new scanning technique called X-Scan. It’s a photogrammetric capture of actors and props where we have 60 cameras in synchronicity with strobes and polarised filters to capture models and textures of actor in less than a minute.”

Which of the action sequences are you most proud of?

“The Bloodshot sequence when Alice drops onto the killing floor and meets this eight foot tall creature. We wanted the sequence to be very physical, with Alice and Bloodshot taking real hits, so we used a motion capture suit with a stunt artist interacting with Alice. I used witness cameras to photograph the stunt performer and Alice and the camera, so that I could have another data point from which to match-move the stunt performer and replace him with the digital character.

“I’m also proud of the sequence where Alice escapes from Raccoon City’s Peak building. Paul wanted spectacular imagery, with big aerial shots and hundreds of thousands of zombies attacking. Alice had to zipline through fire to get out of the chaos. Paul wanted a ‘liquid pillars of fire’ look, so we did a concept art piece early on. It took us a year to develop the fire system, digitally.”

What can you tell us about the creation process for the winged mutant Alice kills?

“That winged creature with the horrific tentacles and jaws is in the game, and we showed it as a tease at the end of the last movie. Paul wanted to continue that idea so we took inspiration from the game but scaled it up. We had a 50-foot wingspan on a creature that was bigger than the Humvee Alice was driving. We went through a design process and showed Paul sketches of what the creature would look like, and we showed him animation tests. He had the action partially mapped out as we were designing the creature.”

Did you storyboard that particular action sequence?

“We did storyboards and a full pre-visualised sequence, which was rudimentary in terms of animation quality but informative for the crew in terms of how to shoot it. We shot it over a few days in Cape Town with a full aperture sensor, shooting 6K resolution on a RED camera. We decided on the cinematic framing in post-production, which is a leap of faith for any director but Paul really embraced the digital process.”

How did you set out to elevate Resident Evil's zombie game when working on this final instalment?

“We had about 50 or 60 real zombies on set on any given day and we’d scan every one of them. If they changed wardrobe we’d scan again. Because we had them in the computer as 3D assets, we could then digitally mix and match them; I could take one head and put it on another’s body. The combinations are endless and that’s important because you don’t want repeating patterns when dealing with that kind of volume. We also motion-captured a bunch of zombies and applied those real performances to their digital doubles.”

Looking back, are you proud of all that you have created for the Resident Evil movie franchise?

“One of the reasons I started Mr X was to work on movies where we had an opportunity to explore visuals and technology and do our best work. Paul and Jeremy [Bolt, producer] gave us that opportunity on this franchise and we’re really proud of it.”

Resident Evil: The Final Chapter is available now on 4K Ultra HD, Blu-ray 3D Blu-ray and DVD. For a teaser of Dennis Berardi and Mr X’s VFX work on the film, check out the trailer below.