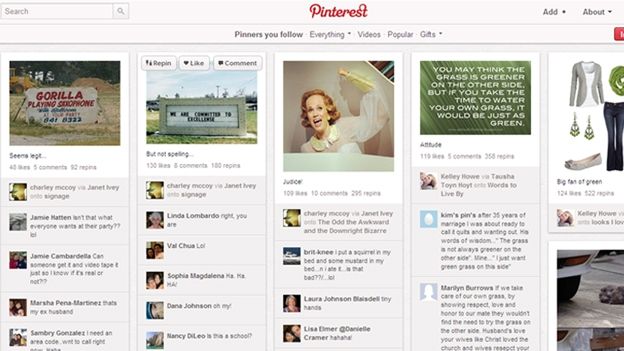 Is Pinterest set to join Twitter and Facebook in the global social networking ranks? Here's what we know about the photo-sharing site that is really taking off

Pinterest was born in late 2009 and by the beginning of 2011 had a unique user base of less than one million. Fast forward 15 months and over 12 million people are making noise about the next big thing in social media. Not only is it generating way more buzz than Google+, it was recently valued at $7.7 billion, making it worth only marginally less than Twitter, which values itself at around $8 billion.

So if you've been dragging your heels a bit, and you're not sure whether you need another social networking haunt, here's five reasons why Pinterest could be here to stay and how it might drag you in in the process.

1. A picture tells a thousand words...

Pinterest is your own digital scrapbook - a place for you to store anything and everything that you see whilst roaming the internet. Seen a great image in a news story? Save it to your page. Maybe a client took you for a delicious lunch... snap it and upload it to your food page. Pinterest is all about building a patchwork of your favourite things, whether that is for your own enjoyment or to share with the world.

"Other social networks like Facebook tell people 'who you are', Pinterest is uniquely different showcasing 'who you want to be' – the perfect platform to express yourself your personal passions, deep interests and tastes..." - Vickie Williams, Social Media Expert at SpreadingJam

You need not worry about the security of your personal details, as Pinterest has no need for them. This social network is purely about expressing yourself and connecting with people via images. As a result, the most personal thing the site will ever ask you for is your name and email address, so you can forget about any Facebook-esque personal security fiascos.

That said, Pinterest's newfound popularity is bringing other legal issues to light. Whilst Facebook and Twitter encourage users to share their own content, Pinterest encourages you to 'pin' content that has already found its way onto the web. The obvious problem that lies with letting users take any picture content they like from the internet is that a lot of this content doesn't belong to the user or to Pinterest. According to Pinterest's Terms of Use, it is your responsibility to get permission to pin any copyrighted material, but the site could be equally liable for providing a platform via which users can upload copyrighted content.

The latest development in issues over copyright has seen photo sharing service Flickr give its users the option to block Pinterest users from 'pinning' Flickr pictures to image boards which may be a big blow to the popularity and usability of the site.

If you've visited Pinterest just to have a look, you'll have noticed that the front-page looks like a bulletin board for the Chipping Norton Women's Institute. In the US, 83% of Pinterest's userbase is female, which almost single-handedly explains why the home page we've looked at right now is made up of chocolate, eye makeup and a variety of small dogs in coats and babies. Thankfully the userbase in the UK is much more even - in fact, 56% of UK Pinterest users are blokes, so get ready for a homepage packed to the gunnels with footballers and T3 covergirls.

Pinterest's sudden explosion of popularity means that the site is charting undiscovered country as far as social networks are concerned. Pinterest is reportedly worth around $7.7 billion currently, and though parent company Cold Brew Labs has strong financial backing, there is still no clear blueprint for how the site itself is going to turn a profit. Still, Pinterest gets over a billion monthly pageviews and has over 12 million unique users: it must be doing something right… right?