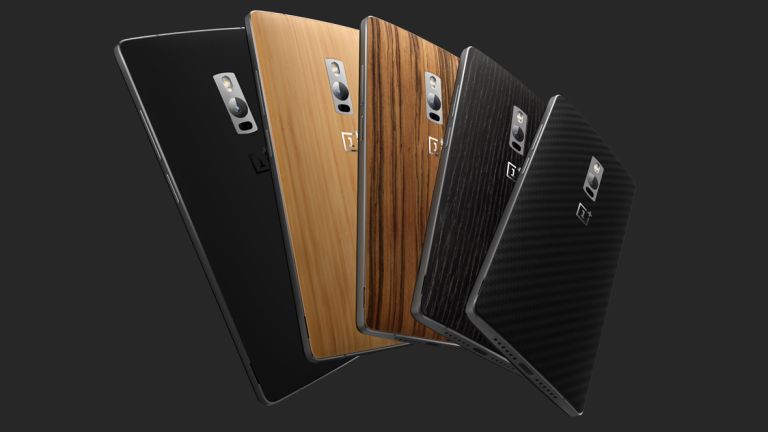 The OnePlus One was a hit that almost came out of nowhere, but in retrospect it's not difficult to see why the handset proved popular: great design, top-end specs and a low price made it one of the most desirable phones of 2014, even if the invite system did limit its availability in the initial stages. The brand new OnePlus 2 is no different.

Still only 18 months old as a company, OnePlus is coming back for more with the OnePlus 2 (yes, it has ditched the word for a numeral).

The OnePlus 2 is the 'difficult second album' for OnePlus - the follow-up to a smash hit that's sure to be carefully scrutinised from all sides. The Chinese firm has its sights set high:

"Instead of merely being on par with the flagships of 2015, we want to show our industry buddies the way forward," the company said in the build up to the launch.

And it has: there's more power in the form of a Snapdragon 810 processor and a new fingerprint scanner hidden beneath a physical home key. There's also a reversible USB Type-C connector, 13MP rear camera, 5MP front snapper and a 5.5-inch full HD display.

The real talking point however is the price.

The phone runs OnePlus' own OxygenOS software in the US and Europe, with the HydrogenOS variant taking over duties in Asia. Both OSes are customised versions of Android, similar to the CyanogenMod software the company had previously been using on the OnePlus One.

There's a new metal-frame design plus finishes including Bamboo, Rosewood and Kevlar. With a premium design the phone is designed to take on the likes of the iPhone 6 and iPhone 6 Plus (not to mention the surely forthcoming iPhone 6S), Samsung Galaxy S6 and S6 Edge, LG G4 and HTC One M9.

As we reported over the weekend you're now free to sign up on the OnePlus website for a chance to win an invitation to buy the OnePlus 2. The OnePlus 2 release date is 11 August.

Check our all our previous OnePlus 2 predictions and rumours below:

When will it be launched?

What we do have official word on is the launch event for the OnePlus 2. It's happening today at 7pm PST (that means it'll be 3am tomorrow, the 28th, in the UK) and the device is going to be unveiled via a virtual reality stream that anyone can tune into. You certainly can't accuse OnePlus of following the norm as far as launch events go.

"A VR launch lets you stand right next to our team and our fans as we unveil our new flagship," says OnePlus. "You'll be able to look around as you check out the phone in a new way and maybe even find a few hidden Easter eggs. It's a new way of thinking about a product launch. We aren't talking at you; we are talking with you."

The company is even making a cardboard VR viewer for the occasion. What we don't know is how long there will be between the launch date and the device actually going on sale - OnePlus has already confirmed the OnePlus 2 will be using the same invitation system as its predecessor, so availability may be limited to begin with.

From these OnePlus 2 leaked pictures, it appears to have a nice big display, so let's hope the bezels mean it's less of handful this time (the original OnePlus One was a hulking beast of a phone).

The back has a wooden finish, though whether that's actually wood or a wood effect, we don't know. The top circle is the camera lens, while the bottom is most likely a fingerprint scanner. Though OnePlus could have taken a leaf out of LG's book, and added rear controls, as the South Korean company did with the G4.

We do have a few confirmed specifications for the OnePlus 2: the manufacturer itself has said the phone is going to be running the same Snapdragon 810 found in the likes of the HTC One M9. It's an expensive chip though so it may push the price higher than it was for the OnePlus One (which started at just $299 or £229 for the 16GB version).

We also know (because OnePlus has told us) that this will be the first smartphone to feature the USB Type-C connector port introduced on the new Apple MacBook. That should equate to faster charging and faster data transfer on the new handset.

Whispers from inside the supply chain say we're going to be looking at a 5.5-inch QHD (2560 x 1440 pixel) display - that's the same size as the OnePlus One but a better resolution. A 16-megapixel camera and a fingerprint sensor have also been mooted in dispatches from Asia but as yet none of these extra details have been confirmed.

How plausible are the rumours?

It's important to remember the OnePlus ethos when weighing up rumours about its next smartphone: the company is focused on low prices and value, which may rule out more expensive add-ons like the fingerprint sensor. At the same time it wants to compete at the top end of the specs scale, hence the Snapdragon 810 processor.

Based on the vibes coming out of the company, we'd expect the OnePlus 2 to be just as bold and disruptive as the first phone was, though pulling off the trick of squeezing powerful components inside an affordable phone is not an easy one. The invite system should help to ease the strain on the supply chain even if it is frustrating for consumers.

When the 27th rolls around we expect the OnePlus 2 to have some minor performance improvements, a better processor and a higher resolution screen. Taking into account the innovative VR launch and the speedy introduction of USB Type-C, it's likely that there'll be a couple of other surprising new features as well.

Liked this? Check out what we think we'll see from the iPhone 6S