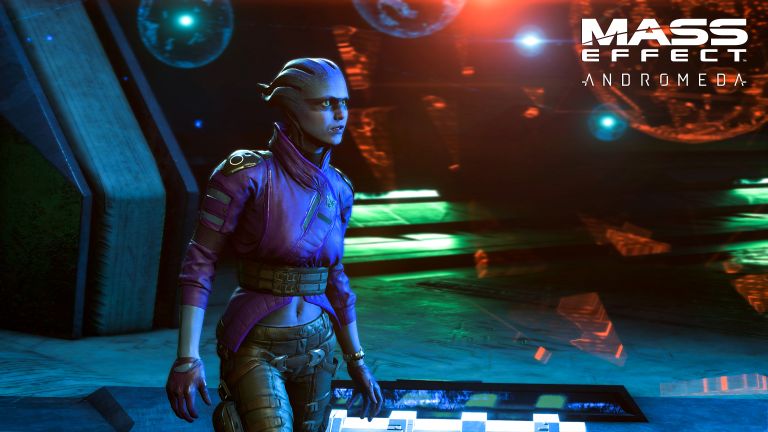 On the 23rd of March a brand new chapter of Bioware’s Mass Effect series lands on Xbox One, PS4 and PC. Mass Effect: Andromeda leaves Commander Shepard behind as humanity battles to build a new home in a distant galaxy.

In Mass Effect 3, the Reapers tore through the Milky Way. The fate of the galaxy hung in the balance, but whilst Shepard struggled to repel the invasion, a contingency plan was already underway. Whether you're a series veteran or a brand new player, Bioware have set up a training hub to get new recruits up to speed.

Alec Ryder is an N7 soldier. One of the first humans through the Charon Mass Relay, he served in the first contact war, and now, he’s leading the human Pathfinder team into Andromeda.

You're his child. One of a pair of twin Systems Alliance soldiers - Scott and Sarah Ryder. The former fresh from a posting near Arcturus Station, the latter a Prothean researcher.

Your mission launched in 2185, just before the Reaper crisis. Three Arks, each carrying 20,000 cryogenically frozen colonists, embarked upon a one-way mission to Andromeda, 2.5 million light years away. Their goal - to colonise a new world.

After a 600-year journey, the Pathfinder teams were tasked with finding the Arks' occupants a new home. But something went wrong.

With Ark Hyperion adrift, you become the new Pathfinder, and Mass Effect: Andromeda will see you navigating this hostile galaxy with a brand new team.

By your side is Cora Harper, a biotic operations specialist with four years of experience fighting shoulder to shoulder with asari commandos. In a tantalising twist for Mass Effect fans, she shares her name with Jack Harper - the Illusive Man from the original Mass Effect trilogy - and there's already speculation about Cerberus involvement in the Andromeda Initiative.

You’ve also got Liam Kosta, a crisis response specialist and Omni-Blade dual wielder. And, in place of EDI, the Simulated Adaptive Matrix (SAM); an English-accented AI plumbed into the Pathfinder team via direct neural implants.

In true Mass Effect-style, you’ll be able to recruit new squad-mates, including maverick asari, Peebee, hard-headed turian, Vetra, krogan veteran, Drack, and a new alien, Jaal, who's already set to rival Garrus as the heartthrob of the series.

If you'd like to get up-close and personal with your team before launch day, high-res character kits are available for Sarah, Scott, Cora, Liam, Peebee and Vetra over on Bioware's blog.

With your team by your side, you'll have a vast uncharted environment to explore. Your ship, the Tempest, is built for stealth rather than warfare, and is piloted by salarian engineer, Kallo Jath. It’ll be your home between missions, complete with an armoury, medbay, research and development, and your own private cabin for invite-only encounters with your crew.

The cargo bay stores Andromeda’s answer to the Mako - the Nomad Scout Rover. This customisable four or six wheel drive buggy comes complete with rear boosters for speed, helium micro-thrusters for jumps, and interchangeable paint to blend in with your environment. It can scan for resources and deploy drones for mining, allowing you to explore Andromeda from the ground.

According to the developers, each planet has its own story, and some come with opportunities for colonisation.

Speaking of getting to know your new surroundings, prepare to meet the Kett. Armoured in bone, these Andromeda natives are set to butt heads with the Pathfinder team. According to the director, they’re not as all out horrifying as the Reapers, leaving room for side missions and exploration. This should come as a welcome relief to the guilt-ridden ME3 players who idled away on the Citadel whilst the fate of the galaxy hung in the balance.

As you’re fighting off these new foes, you’ll notice that the combat has been tweaked. You can expect to be jumping out of cover and right into the action, and you’ll be equipped with a jetpack for fast-paced encounters. You'll have access to pistols, shotguns, assault rifles, sniper rifles and melee weapons, as well as mines, grenades, flamethrowers, turrets and, of course, biotics.

Forge your own path

Bioware's games are renowned for their flexibility, and Andromeda is no different. You’ll be able to customise your character’s appearance, and the classes and abilities have had an overhaul, with a more freeform system that allows Ryder to branch down tech, biotic and combat trees simultaneously, and to switch between different styles mid-game. And, for the first time, Bioware are bringing a crafting system to the series, allowing you to build and name custom kit.

PRO TIP: In MEA, you can craft your own krogan-style hammer and name it GRABTHAR'S HAMMER.That one's free, folks. #spaceJanuary 17, 2017

Fans of the series may be disappointed to hear that some of the original races - including the quarians and the geth - will be missing. But, Bioware have left the door open to bring back favourites further into the series.

For now, we’ve seen salarians, krogans, turians, and asari, and there will be plenty of new aliens to keep things interesting. And, the good news is that ME2-style loyalty missions will be making an appearance again, giving you plenty of opportunities to get to know your new friends.

Shepard’s familiar paragon and renegade dialogue choices are also out, replaced by more fluid role playing that allows you to agree or disagree on a case by case basis, rather than mashing the left or right options max out ‘good versus bad’.

And, for those of you interested in relationships with your crew, Bioware had this to say.

If, like us, you absolutely can’t wait, EA Access members get a 10 hour sneak preview five days before release.