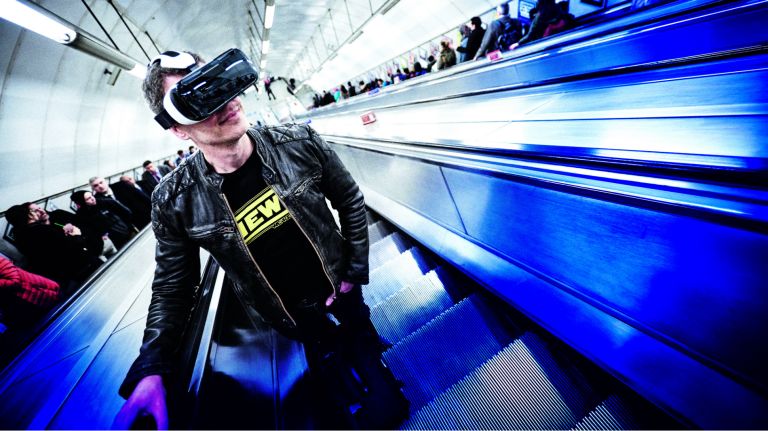 “We want you to spend a whole day in VR,” said T3. “It'll be entertaining to watch you slowly lose your sanity, balance and lunch.”

“Ok,” replied our intrepid writer, “where do I sign?”

I'm no stranger to virtual reality. As head of innovation at creative agency Brandwidth, I get to play with a lot of this stuff, from the simplest Google Cardboard headsets, through multi-lens, 3D-audio VR cameras, to 'The Void' – the ultimate VR playground in the heart of Utah.

I derive great pleasure from pushing VR boundaries, disrupting industry expectations and making a nuisance of myself. At Brandwidth, we tackled our first VR project 17 years ago, and we've come so far it would be a shame to settle for low-rent content from a bunch of self-proclaimed 'experts' with a background in monoscopic 360-degree video.

We research, design, develop, advise on and regularly talk about this stuff, but T3 has thrown down the virtual gauntlet and it's time for me to put my headset where my mouth is. Or my eyes. (Anything else would just be plain weird.) Although I packed and charged all my kit before leaving the house, I decide it's safer to keep my first headset in its case for my short drive to Farnborough train station. It's safer and, well, more legal.

My first real test as a virtual commuter presents itself on the escalator at Holborn tube station. If you've ever played human pinball in the dark, it's very similar to getting from an underground train to a set of moving stairs. The upside (quite literally) is that VR gaming on an escalator counters motion sickness, provided you're moving in the direction of the action.

Having negotiated the ticket barrier and several hundred yards of pavement, I discard my Samsung Gear VR Innovator Edition and strap on an HTC Vive to run around Brandwidth's London office.

Our long-suffering team are used to my unconventional road-testing, with one of my earliest demonstrations involving an Oculus Rift light-saber battle… with myself. On this particular occasion, I test the Vive's front-facing camera, collision detection and two wireless controllers. The Town Hall Courtroom that serves as our central office becomes a post-apocalyptic, zombie-filled battleground, and I proceed to blast chunks of virtual brain matter for a good hour.

I live in hope that next-gen gaming platforms will enable the more unhinged members of society to act out their fantasies in VR, rather than encourage them to take the physical route. Anyone with a weaker will should probably take baby-steps into the virtual future.

I met a US lawyer at a secret Hollywood virtual-reality gathering last year. He believed the future was bright for his kind, as litigation in VR will be a big thing: damaged cars on virtual test drives, shootings, theft, virtual defamation. He also claimed that virtual reality is the future for filmmaking, rather than one of many options, so he was actually an idiot.

Stars in my eyes

Coffee can't come soon enough, so I drop my Vive in favour of a View-Master and a café called the Holborn Grind. Grabbing a seat at the counter, I browse social content and a couple of new apps on my iPhone as the world speeds past, all housed in Mattel's fun take on Google Cardboard.

No sooner do I emerge from the coffee shop than I'm plunged into my next beta test over an early lunch. This consists of physical food and a solid sofa as I settle in to test the Death Star trench run in our Star Wars Scene Maker VR app, connecting an iPhone to the Rift DK2 for backward compatibility – it still works, and the light-saber test is an added bonus!

The afternoon brings another Vive test, steady rain and the chance to stand in the middle of Oxford Circus. Most tethered VR headsets will never venture further than an office, bedroom or 'innovation lab', but the Vive presents a strong case for experiential activity with its unique 15ft x 15ft room-scale motion-tracking. Undeterred by the precipitation, I take the Vive, a PC and heavy-duty power supply to one of London's busiest streets.

It's a good space to test Tilt Brush as I look like a cross between Marcel Marceau and a spray-can street artist. Rain stops play, so I head back to the office using the Vive's front-facing camera, before donning my commuter hat (not an actual hat) again.

At home, the focus changes. My poor daughters have acted as gadget guinea pigs for most of their lives, but they have some strong views on wearable tech, touchscreens, 3D printing and VR. Not normal for six- and ten-year-olds.

I unpackage the Sulon Q, one of the first in the world outside of Sulon's Toronto HQ, and enjoy some mixed reality – a marriage of AR and VR. Hattie grabs a seat on my right, and gets up close and personal with some elephants, while Olivia tackles some VR puzzles in UsTwo's Land's End on the Gear VR. It's the perfect virtual family.

I round off the day with a quick conVRence call on the Gear VR, before removing the headset, rubbing my poor red face and vomiting into the magazine rack. I've been in and out of VR so much in one day, it feels a bit like virtual waterboarding. Would I do it again? I'll probably do it again tomorrow!