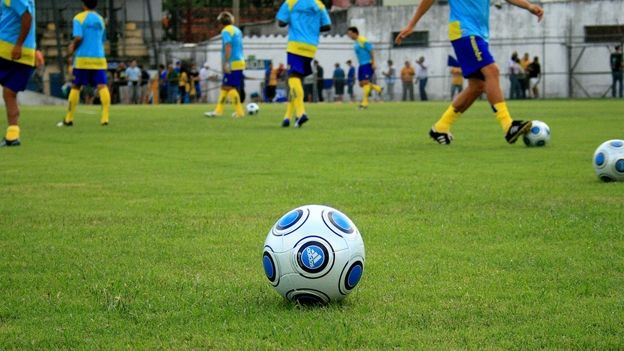 We take it for granted nowadays, but technology has had an enormous impact on football. Go back just 10 years, before smartphones were ubiquitous, and it was a different game altogether, for fans and players alike.

With the rise of wearable gadgets, ever more powerful smartphones, and even more accurate player data, technology will continue to shape the game we know and love.

Fitness monitoring tech embedded into the kit could also give the coach feedback on players' pulse, blood pressure, sugar, oxygen and CO2 levels, which could help inform their decisions on who and when to substitute.

Sensors in players' boots would measure impact with the ball, as well as with other players. This would help the referee decide whether a foul actually took place, or if the victim was auditioning for Splash!

Adidas has already touted a Smart Ball, which has an accelerometer and magnetometer inside. Every time it's kicked, it sends real-time results via Bluetooth to the Smart Ball app, so you can see results on your phone. Adidas has also launched a kit that tracks player movements and gives the coach feedback, so these technologies are closer to becoming the norm than you might think.

Sunday kickabouts could be transformed as well. Android players could be programmed to act like their real-life professional counterparts, so you could have big-name players called in as ringers. Give it 50 years, and they'll look and feel like people, instead of clunky robots trying to keep up.

Also in the next 50 years, we could even remotely inhabit androids on the pitch, so older or less able people could still feel the wind in their hair and hear the crowd chant their name.

We already have player cameras that follow your favourite star around the pitch, but what if the players themselves actually wore cameras so you could see the action from their perspective? Not only this, cameras could also be carried by flying insect-sized robots that would follow the players around. Sensors in the turf and goalposts would monitor wear and tear and ball impact, which would be useful for groundsmen.

Wearable technology is on everyone's lips at the moment, but how can it integrate into football? Contact lenses could give players a heads-up display, showing information like the weather and wind strength so they can adjust their shots and passes accordingly. This is expected to be the norm in 25 years, according to Ian Pearson, a futurologist commissioned by HTC to write a report on the future of football.

Get in the game

Tech that improves player training could also trickle down to footie computer games.

Active skin uses electronics printed on the surface of the skin to link the nervous system and blood chemistry to external networks and devices. Through analysing player movements, and injecting sensory stimulation directly into nerves in the appropriate parts of the body, players would feel when they're moving correctly and become uncomfortable when they're not.

This would improve muscle memory, helping players train better. It could also be ported to football computer games, letting you feel as if you were actually the player on the pitch. Looks like a night in with FIFA might no longer be all about beer and pizza…

Players, fans, the people tending the pitch – looks like we'll all gain from technology's impact on the beautiful game.