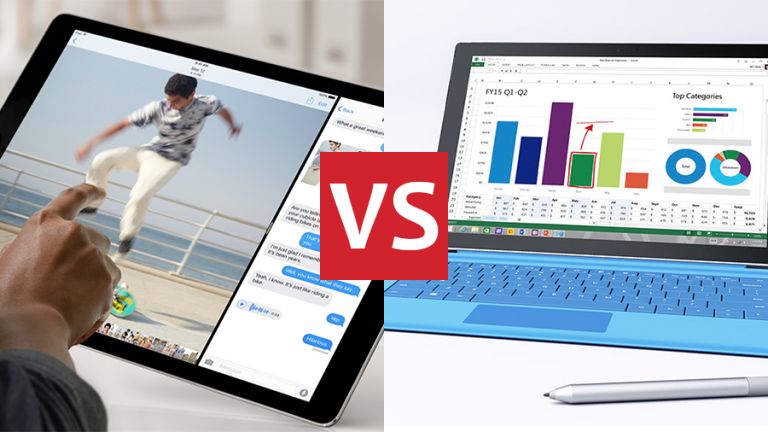 There's a new giant tablet/hybrid laptop in town, and it's called the iPad Pro. As soon as Apple took the wraps off its latest device, the comparisons with the Surface Pro 3 from Microsoft were immediately being made - especially with the Smart Keyboard cover accessory to consider.

If you're wondering how these two devices stack up against each other - and where your money should be spent - we've broken down all the information you need to consider. Find out whether the iPad Pro or the Surface Pro 3 comes out on top.

Apple's new slate looks exactly what it is: a super-sized iPad, stretched out to 12.9 inches of screen size. It's a little bit heavier but almost as thin as the iPad Air 2, and Apple is hoping there are enough power users out there to make this a worthwhile product launch. During the device unveiling, the Cupertino company emphasised the benefits of all that extra screen space for movies, productivity apps and creative tasks, but at this size you're starting to lose the portability factor that makes tablet devices appealing in the first place.

The Surface Pro 3, in comparison, looks a little bit more like a laptop that doubles as a tablet rather than the other way around (consider the USB 3.0 and microSD ports, for example). It's slightly chunkier and thicker than the iPad Pro, and it's obvious Microsoft doesn't yet have a Jony Ive in its ranks. Having upgraded the screen size from 10.6 inches to 12 inches on this model, the device is firmly aimed at the laptop/tablet hybrid market, and it's unlikely you're going to pick this if you're going to be primarily using it as a tablet.

A specifications face-off is a little tricky as we don't know everything about the iPad Pro's innards and the Surface Pro 3 is available in a variety of configurations. Here's what we do know: the iPad Pro's 12.9-inch screen runs at a resolution of 2,732 x 2,048 pixels (5.6 million in total, rounded up). Inside there's a brand new A9X processor that Apple says outperforms 80 percent of the PCs shipped in the last year - that will include a lot of low-powered notebooks, but it's still an impressive claim. With the efficiency of iOS 9, the iPad Pro should run very quickly indeed. As for RAM, we're not yet sure, but 4GB seems to be a good guess, and 32GB or 128GB of internal storage is available.

The Surface Pro 3 is running a fully fledged desktop OS and needs some extra power to do so - it offers low-end laptop specs rather than high-end smartphone ones. You can go from an Intel i3 CPU with 4GB of RAM and 64GB of storage right up to an Intel i7 CPU, 8GB of RAM and 512GB of storage space - see what we mean about laptop specs? The 12-inch display offers a resolution of 2,160 x 1,440 pixels, and its 5-megapixel camera is narrowly edged out by the 8-megapixel model on the iPad Pro.

The iOS 9 vs Windows 10 issue has to be a major part of any comparison between these two devices, and it emphasises the different approaches from Apple and Microsoft. iOS 9 is very much a mobile OS: you're more limited in what you can do, but you get a simpler and more streamlined experience in return. Apple's App Store is second-to-none, and the new iOS ushers in features like the Split View mode where you can run two apps side-by-side - this should be perfect for iPad Pro users. With apps like Office for iPad now available, iOS is more capable than it's ever been.

We've spoken about the Surface Pro 3 being a laptop in disguise, and the Windows 10 software it runs is exactly the same as the OS on laptops and desktops. Both Microsoft's new 'universal' apps and traditional desktop apps can be run on here, and Windows 10 includes its own window snapping feature so you can get programs up side-by-side if you need to. If Apple leads the field in mobile apps, Microsoft's Windows still has the edge as far as desktop apps are concerned, which leaves both devices pretty much neck-and-neck.

iPad Pro vs Surface Pro 3: Accessories and other factors

It's perhaps only with the accessories that Apple's iPad Pro begins to make sense. The Smart Keyboard and Apple Pencil give you new ways of interacting with the device and really distinguish it from the iPad Air 2. Microsoft's Surface Pro, meanwhile, has exactly the same kind of accessories on offer: the Type Cover and the Surface Pen. Microsoft's offering does have a trackpad though, and you can use a mouse.

Quoted battery life is about the same for both devices - it's not really fair to compare the two here until the actual reviews come in - and when it comes to pricing we only have US figures for the iPad Pro so far. The slate will cost you between $799 and $1,079, with the keyboard cover $169 and the stylus $99. The Surface Pro 3 is going to set you back anywhere between $799 for the entry level model and $1,799 with the highest possible specs. You get the Pen included but a Type Cover costs $129.99.

So, which one is right for you? The important questions to ask are how you're going to use the device (the iPad Pro is more tablet, the Surface Pro 3 more laptop), whether iOS 9 or Windows 10 suits your needs best, and how much you're willing to spend. Even then it's a tough call - these are both very impressive bits of kit.