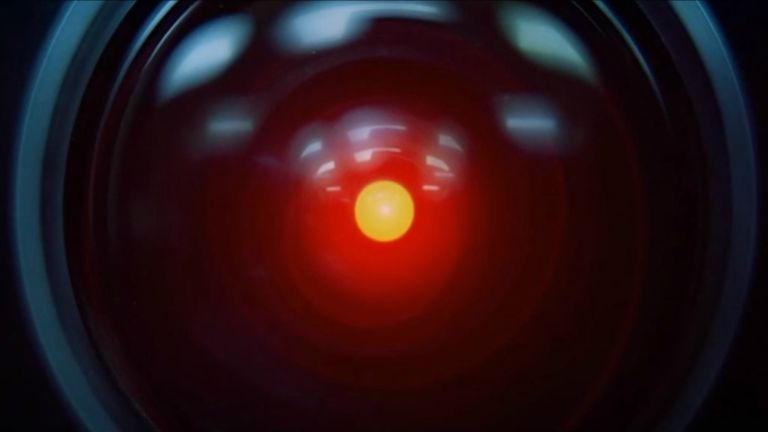 Even on the most everyday, domestic level, having machines and code handle certain aspects our daily routine has a number of benefits, from managing our calendar and appointments, to enabling our enjoyment of multimedia, and onto helping us find our way on journeys and directly answering important questions about the world, AI is already demonstrating its usefulness to millions of people around the world.

And, for Hollywood at least, it is that entwining with humans and how they live that holds most interest, with hundreds of films now in existence that contain artificial intelligences in some form. Naturally, how these AIs are depicted vary wildly, no-doubt echoing our hopes and fears for this amazing new technology.

After some careful consideration, we feel these are the best movie AIs to date.

One of the earliest and most famous depictions of AI on film, HAL 9000 from Stanley Kubrick’s A Space Odyssey is an artificial intelligence that, according to itself, is “foolproof and incapable of error”, with a quite astonishing IQ level.

Naturally, as an AI developed by humans, and one that it shown to very much be so in the film, it is fallible and this leads to some disastrous consequences for the crew of the spaceship HAL is controlling. A nuanced and interesting depiction of the power that a true sentient AI could hold.

Skynet is a neural net-based artificial intelligence that gains self awareness after spreading to millions of computer servers across the world, including many military systems.

After triggering a nuclear apocalypse to eradicate humans and therefore any threat to its existence, Skynet proceeds to use its vast superintelligence to design and then manufacture humanoid autonomous robots called Terminators to hunt down and kill any survivors, triggering the dramatic events depicted in the film.

Skynet is most interesting due to how it gained self-awareness, which relied on mimicking biological neural networks.

Video games have long been home to some interesting AI developments, mainly due to their combative nature and the need for their programmers to generate a genuine opponent for the human player.

The most famous depiction of this on film is Tron’s Master Control Program, a sentient rogue AI descended from a chess-bot that begins to subsume other government and military programs to grow its power.

Only talented programmer Kevin Flynn, who ends up fighting the MCP in its own mainframe, can stop it.

Wall-E is an interesting depiction of AI in a film as it represents, albeit in an advanced stage, the sort of domestic applications of artificial intelligence in robotics that we are seeing today in the real world.

As a machine designed purposely to clean up human rubbish, it is evocative of the robotic vacuums and lawnmowers that continue to grow in popularity, however, the film’s makers manage to imbue Wall-E with a large dollop of humanity also, with human motivations and emotions, meaning the machine is arguably anything but soulless.

Project 2501, also known in the film as the Puppet Master, is an advanced artificial intelligence that was created by the fictional Section 6 of Japan’s Ministry of Foreign Affairs to hack into other nation’s computers and cybernetically-augmented operatives.

The AI becomes sentient, though, and after escaping its secure facility in a prosthetic body demands asylum as self-aware form of life in its own right, stating that its self-preserving programming is no different from DNA.

Most interestingly of all, Project 2501 ends up merging consciousness with Ghost in the Shell’s protagonist, Major Motoko Kusanagi.

With the Cuban Missile Crisis still relatively fresh in the public consciousness this 1980s depiction of an AI that is given control of a nation’s nuclear arsenal, only to be tricked unknowingly by a young hacker to enter a nuclear war end-game scenario, one in which will lead to a an apocalyptic World War III, reflected fears of nuclear war, as well as the power of video games and AI in general.

Only by forcing the War Operation Plan Response AI to understand the human concept of futility, something achieved by making it play a game of tic-tac-toe against itself repeatedly, never winning or losing, is nuclear war prevented.

AI Week is brought to you in association with Honor.