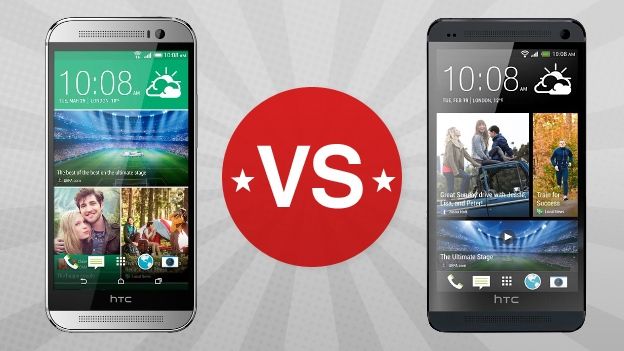 The HTC One M8 is the long awaited successor to T3's Gadget of the Year 2013 the HTC One. But now the details are out, the big question is whether it's worth the upgrade? Let's find out.

HTC's new flagship, the One M8 comes boasting some nice improvements, like a new camera companion, updated Sense software and top of the line internals. But if you're already rocking the five star HTC One, should you start saving those pennies for an upgrade? We put the two devices head to head to see what's changed.

Make sure you read our HTC One M8 review.

HTC One M8 vs HTC One: Size and Build

First up the design, and it looks pretty similar, with an aluminium unibody design, glass front and overall whiff of design flair. At first glance, little has changed, not that we are complaining. One change though is the weight - it is in fact heaver than its predecessor at 160g compared to 143g, though it keeps the same thickness, just 9.3mm.

The new model is also a tad curvier and features a more polished chassis, helping it nestle comfortably in your palm.

The ports have had a revamp with the HTC One M8 adding a handy micro SD card slot (bung a 128GB Micro SD in this baby and you've got a serious media machine) and the headphone jack is now on the bottom – an addition that, while small, is something we really appreciate.

The latest iteration also comes with a new finish; a metal grey that has a brushed-metal back. There's also a very 'of the moment' gold colour option, following in the footsteps of both Apple and Samsung.

While the original One used two capacitive buttons, the One M8 now moves them on-screen and goes with the regular three button Android layout. A move for the good, if we say so ourselves.

HTC One M8 vs HTC One: Screen

The screen is larger, now 5-inches instead of 4.7-inches, but keeps the same resolution of 1920 x 1080. As the screen has got bigger, the PPI has dropped slightly, from 469 to 441. Do not despair though, as this drop is minimal and the screen should still look excellent.

HTC One M8 vs HTC One: Processor

Powering the new HTC One M8 is a Qualcomm Snapdragon 801 chip, while this is still dual-core, the same as the One; it is now clocked at 2.3GHz, instead of 1.7GHz.

The RAM is unchanged, still sticking at 2GB, but the 32GB starting internal storage options we saw last year has been slashed to 16GB. Though, with the addition of the micro SD slot, this isn't much of an issue.

HTC One M8 vs HTC One: Camera

It's the camera that's the biggest difference between the HTC One and the M8. The ultra pixels are the same, at four in total on the rear-facing camera, but it's had a complete UI overhaul making it much simpler to use.

HTC has also added the second depth-sensor on the back, so you can take multi focus images and add parallax effects to snaps. The camera on the original was a bit hit and miss, so we really hope there are better things to come from the M8.

The secondary camera has had a huge spec bump, up from 2.1-megapixels to five and both shoot 1080p video, making this the ultimate device for selfies.

HTC One M8 vs HTC One: Features and Operating System

The Sense Android overlay has been spruced up for the new device, now labelled 6.0, it features improvements to Blinkfeed that let you alter colours and make it much more personal. There's also a whole host of new gestures integrated into the device, making navigation much easier.

There's no Beats Audio, though the awesome BoomSound front facing speaker has been improved to offer a wider frequency of audio, giving your tunes even more depth and punch.

Internally, the battery has jumped to 2600mAh from 2300mAh on the HTC One, a nice little upgrade, but due to the increased screen size we'd guess that battery life should probably be about the same.

HTC One M8 vs HTC One: Overall

While the changes may not jump out at you, the slightly altered case, improved internals and larger screen really do build on what was our favourite phone of 2013. Plus, the unique new 'dual' camera is something we're really excited, and a little intrigued by.

Make sure you check out our HTC One M8 review.