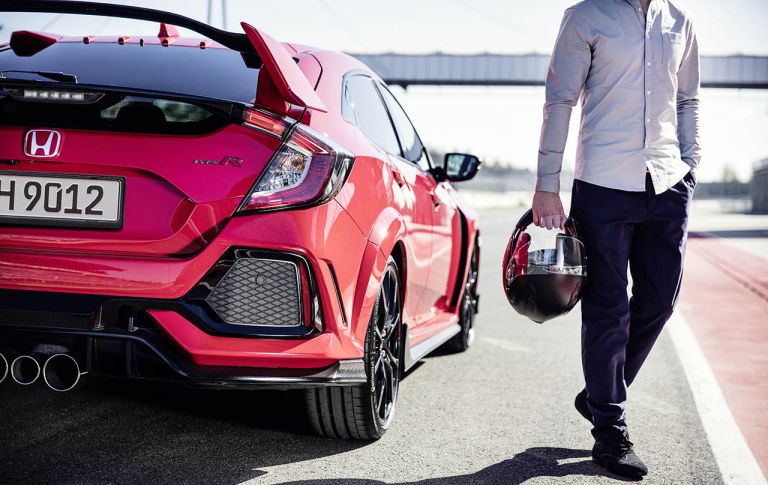 The new Honda Civic Type R (2017) is a fast car. We know this as we're flying out of a late apex on the Lausitz EuroSpeedway at north of 140 km/h while chasing a professional race car driver, the track melting away in a rapid blur of tyre screech and engine growl. We're driving on the edge of our ability and this incendiary hot hatch is in its element, handling the circuit with extreme agility and performance, demanding better lines, later braking and to have its power constantly pushed to the max.

This is entirely unsurprising - after all, the Type R has always had race car in its blood. And T3 is here on the new Honda Civic Type R (2017) launch to put it through its paces, both on track and off it. Read on for the all important numbers and verdict.

First up, however, you should watch the Type R set the new lap time record for front-wheel drive (FWD) production vehicles at Germany’s legendary Nürburgring:

The Honda Civic Type R (2017) looks markedly different from the previous model (FK2). Asides from having a far more muscular and aggressive overall style, as well as a good dose of Transformer, the racer is now 165mm longer, 36mm lower and 2mm wider than before. This makes it look more in-your-face, so to speak, and screams power and performance to the eye.

Despite this new aggressive set of lines, the overall aerodynamics of the Type R have been improved, with a smoother underbody, front tyre air curtain, slim rear wing and vortex generators at the trailing edge of the roof line helping to improve the balance between lift and drag, therefore improving high speed stability.

At the front of the Honda Civic Type R (2017) can be found a redesigned and very forceful bumper with a winged carbon fibre effect splitter and slatted ducts. This carbon fibre effect extends around on the skirts too in between the front and rear wheel arches, which themselves are now larger to accommodate the car's new 20-inch berlina black alloy wheels (245/30 R20).

The Honda Civic Type R's bonnet is made from lightweight aluminium (it weighs in 5.3kg less than a steel one) and is fitted with a new centrally sited air duct with trapezoidal recess, improving cooling and downforce. As such, the overall drag coefficient is reduced by three per cent on this new model compared to the previous Type R.

The cabin of the new Honda Civic Type R has also seen some revision compared to the previous model. The seats now incorporate revised bolsters and cushion pads, the steering wheel now incorporates red leather inserts, and the gear lever knob is constructed from machined alloy. In addition, the dashboard has been tweaked and now sits 65mm lower than before, improving visibility while behind the wheel. Boot space sits at 414 litres.

Overall T3 really liked this new, hyper aggressive design, both inside and out. If you're going to go hot hatch racer, then commit fully.

Under the hood of the new Honda Civic Type R (2017) is a 2.0-litre VTEC turbo engine that delivers 320 PS at 6,500rpm. Peak torque sits at 400Nm from 2,500rpm to 4,500rpm, and combined these factors helps generate a tasty 5.7-second 0-62mph time. Top speed sits at 169mph. These performance statistics mean the new Type R is both the fastest accelerating and quickest car in its class.

In addition, a four-wheel adaptive damper system comes as standard, with the system incorporating upgraded shock absorber units over the previous Type R, as well as serious high-performance Brembo-brand braking system. This system includes four-piston calipers applying braking force to 350mm ventilated discs at the front, and to solid 305mm discs at the rear.

Lastly, the new Honda Civic Type R (2017) comes with a relocated fuel tank compared to the previous model, as well as a lower floor, factors that mean the car's centre of gravity is now 10mm lower, and the driver's hip position a whole 25mm lower.

To test the new Honda Civic Type R (2017)'s race car performance T3 headed to the historic and fast EuroSpeedway at Lausitz, Germany. After familiarising ourselves with the track, we headed out along with Robert Lechner, a professional race car driver that would both advise us and act as the lead we needed to chase down.

Here we were run through each of the vehicle's modes, Comfort, Sport and +R. The Comfort mode, which is a new addition to the Type R, has been designed for everyday use in mind, and is geared around enhanced usability. In this mode the Type R's suspension is softened and steering smoothed out, factors made possible in part thanks to the vehicle's three-chamber adaptive dampers, which offer greater variability of damping force in both tension and compression.

For track work, however, we really wanted to switch everything up a level to Sport and then +R.

Sport mode, which is the default setting for the new Honda Civic Type R (2017), was next, with Lechner advising T3 to kick it up a notch. This mode is designed to offer a blend of comfort and dynamic response, and as soon as T3 activates it the difference become immediately noticeable. Everything is suddenly tighter and more agile, handling sharper, and engine responsive more aggressive. Gunning it around the EuroSpeedway chasing Lechner suddenly comes alive and T3 is reminded of exactly what this machine has been built to do.

Just as T3 got to grips with the Sport mode though Lechner indicates its time to take the Type R to its ultimate track driving mode - its time to switch into +R. Honda says the +R mode remains the choice for real track driving, and after turning it on it is evident as to why. The high engine responsiveness experienced in Sport is now taken to an even higher level, with torque-mapping changed to a more aggressive and performance-focused configuration (more torque at lower engine speeds).

The Type R's rev-matching function is also enhanced in +R mode, as too the damping force created by the car's new four-wheel Adaptive Damper System (15  per cent increase over Sport mode). Overall the ride is made significantly firmer, stiffer and flatter too, and while T3's skill behind the wheel cannot take the Type R to its true limit, as it can be by Lechner, we are amazed at not just how the vehicle's personality shifts with the mode changes, but how it enhances our ability on track, constantly letting (demanding, more like!) us go faster around the Lausitz circuit.

After a morning on track, we follow up with a spot of unrestricted Autobahn,   and then out into the surrounding German countryside. Sport is ideal on the well-maintained Autobahn, while Comfort mode makes cruising around tree-lined sweeping curves, and on pock-marked back roads surprisingly slick. We decide that while you probably wouldn't want to grand tour in one of these new Type R's, you certainly would find it suitable for the daily commute, or for long weekends away and holidays.

While on test one of the things that impressed T3 most in the new Honda Civic Type R (2017) was the central "technology centre" console, which boasts a piano black finish and rocks a discreet lower storage area that also grants access to  HDMI and USB ports, a 12-volt power socket and, on the GT spec, a wireless smartphone charging pad (we tested this pad extensively and it worked reliably with our Samsung Galaxy S6 Edge Plus phone with both the case on and off).

The Type R's console comes equipped with a seven-inch TFT-LCD touchscreen, which allows access to all of the technology centre's functions, such as navigation and entertainment, as well as displaying a series of virtual gauges and function readouts. Many of these are mode-specific, meaning that depending on whether or not you are cruising in Comfort or tearing it up +R, these change, with things like G-Meter and lap timer recorder sliding in and out.

Lastly, the new Type R now features a bespoke triple-exit exhaust system that modulates the sonic tone of the engine. This is achieved through the central tailpipe, which is slightly smaller than those flanking it, reducing excess booming effects at mid-load engine speeds by switching to a negative flow, sucking in ambient air. Overall the flow rate of the exhaust has been improved by 10 per cent compared to the previous Type R.

Oh, and it also looks fantastic.

We liked the previous iteration of the Type R, however, after going hands on with the 2017 edition we have to say that Honda has managed to improve that vehicle in basically every way.

It's faster, stiffer, more agile, more comfortable and, design aside, everyone we spoke to who had got behind the wheel of this record breaking hot hatch was in agreement - it's the best Type R Honda has ever made.

On the design, it is obviously going to divide opinion, with some preferring the more understated look of previous iterations (notable the EP3). We were totally on board with this new, hyper aggressive, brutally futuristic aesthetic though. If you are in the market for a hot hatch that is a race car at its core then you should surely go for that 100 per cent in terms of design, not check it at some halfway house middle ground.

The red and blue colour schemes in particular looked superb.

Maybe the biggest compliment we can bestow on the new Honda Civic Type R (2017) though is how it manages to successfully hold its chimera personality together, delivering a vehicle that is just at home tearing it up on the track as it is both on the school run or cruising long-distance on the motorway. This hot hatch really does seem to do it all and, at a little over £30,000, that makes it an incredibly tempting proposition.