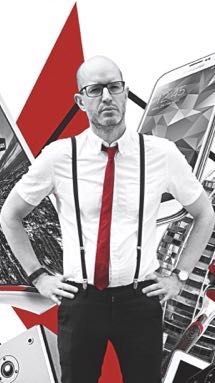 I'll tell you what, I really resent Steve Jobs's legacy. Okay, he made the iPhone and the iMac, and re-popularised the polo neck.

But he also birthed the kind of tech launch where corporate grandees act like they're rock stars or stand-up comedians.

In August, Nest did a worldwide unveil, in that style, of a smoke alarm and an IP camera, and it was exquisitely awful. The CEO and sundry VPs missed cues, used horribly awkward body language, tried and failed to banter, and spent about the same amount of time to describe a smoke alarm and an IP camera as St Paul took to explain scripture to the inhabitants of old Judea.

The actual products? They were great. But they could've sent me a press release by email, then allowed a quick hands-on, and I'd have gleaned the same amount of info.

Marshall, which makes the world's rockingest amps, launched a music-based Android phone called the London. The event was in a former church so camply baroque 'n' roll, I expected Bonnie Tyler in black leathers to sweep in on a motorbike at any second. They were serving Jack Daniel's and hot dogs.

The head guy came out to talk about London. Konrad Bergström (for that was his name) boomed, “Wooh! Pipple say we cannot do zis! What the f**k?”

You couldn't really picture Tim Cook or Satya Nadella saying that, could you? Maybe Steve Ballmer, at a push.

“Guys! Does your phone battery ever run out?” Konrad continued. “When mine does, I don't even know my mum's name!” [Lengthy pause] “…Er, or her number at least.”

And then it all started to feel familiar. The setting and the language were different, but at heart this was a classic phone launch – awkward hosts, lengthy pauses and all.

Subtle dissing of the opposition? Yes, that happened: “Guys, I don't want screen better than my eyes can see! 4K? 8K? What the f**k?!”

It was like an Apple event hosted by Bizarro World; everything was familiar, yet wrong. Like one of those dreams where you're in your house and all seems normal, but then you realise the sofa is made of blancmange and your partner has the head of a meerkat.

For all their protestations that they do things differently – “Hey, I'm not a specs guy. F**k the specs!” Konrad avered, as a list of all the London's specs filled a 100-metre-wide TV behind him – this hit ALL the notes of a standard tech launch, just more rockingly.

It had those weird moments of dissonance, where a blatantly untrue claim is made, then left to hang in the air like a fart in a lift. Marshall's chief software guy, whose name I think was Stefan Zwazz, said this about the London's stripped-down experience: “We killed all the cheesy wallpapers, the ringtones, the bloatware.”

Well, that's nice. Then, in the very next sentence, he said, “We made very curated, classy wallpapers. We give you ringtones that rock!”

Now, the audio performance of the London seemed really good, but if that's not extraneous, non-native bloat, I really don't know what is.

Big tech launches always need musical guests, and, oh boy, this had them. Normally, Drake or U2 will come on and say how much they love the brand – no, really, they totally do love it – before doing a big hit.

Marshall had Phil Campbell of Mötörhead, a man with a face like a melted doll and the dress sense of an American prison guard on holiday. He came on and said, “Hello motherf**kers”, then performed a very lengthy blues-guitar solo.

The very end of the event was where it reached the apogee of “Just like a tech launch but really, really not.”

First, Konrad “not Tim Cook” Bergström bounded back on stage for his final address. Here, an Apple, Microsoft or Samsung big-wig would say, “We think this is the best [product name] we've ever made. Thanks!” Konrad said, “Big boys, look out. We might come and f**k you in the ass!”

And then Mick Jones of The Clash - who nowadays looks like a dodgy vicar - came on and introduced a gospel choir, which did an absolutely earth-shattering version of London Calling. It was amazing.

So, that's it. With Nest and Marshall, I'm now sure we've reached Peak Launch. I've seen the worst and the best in one month. I'm retiring.