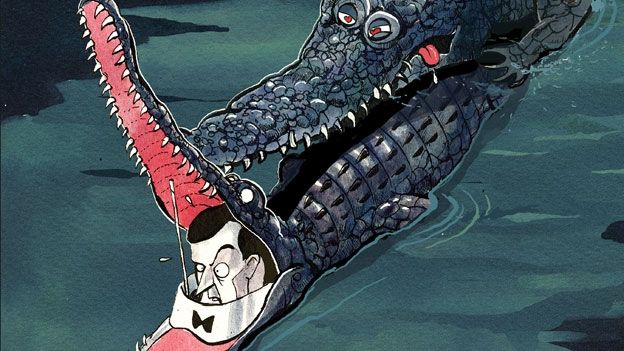 As 007 reaches the ripe old age of 50, we've picked the 'cutting-edge' Bond gadgets that really should have been left back at MI6 HQ

Funny how we all remember Goldfinger's razor hat and nads-seeking laser, yet no one can recall a single second of Quantum of Solace and its Sony Ericsson C902.

For a truly classic Bond film, the tech just has to be memorable for all the wrong reasons and to celebrate 007's 50th birthday, we remember 10 of the worst Bond gadgets to make it onto the big screen.

Near the long-in-coming climax, Bond is on his way to storm the evil Kamal Khan's palace. What better way to do so than disguised as a crocodile? Because no one will question a completely inert croc floating along, will they? Amazingly, this is not the most ridiculous moment of Octopussy. Earlier in the same film, Moore escapes foes by launching a small plane literally out of a horse's arse.

The one thing that dates GoldenEye worse than Pierce Brosnan's haircut: a phone box that's ostensibly for making calls in, rather than existing solely as a vagrant's urinal. It's just one of many gadgets to play fleeting cameos during Bond's visits to Q's lab,

usually introduced with a phrase such as, “Now pay attention, Bond, I'm a very sexually frustrated old codger of indeterminate sexuality, and I don't have time for your juvenile antics… Now, here's an exploding haddock.” In this case, an airbag bursts out when you pick up the phone receiver, crushing whoever's putting up calling cards for Latvian street walkers against the glass.

The Moore Bonds are a treasure trove of ridiculous gizmos. Sure, Sean Connery may be cooler, and Daniel Craig more raw, but neither has utilised a spiked umbrella that closes in on their victim's neck as soon as it gets wet, then quipped, “Stinging in the rain?” in a lovely brown voice while arching an aristocratic eyebrow.

Roald Dahl penned the screenplay for this Bond outing, so audience expectation was high. They weren't disappointed, with a bad guy who lives in a volcano, space ships eating each other, Blofeld dropping someone into a pool of man-devouring piranha and, of course, the fold-up “autogyro” Little Nellie. This Happy Shopper chopper was cool, but stretched credulity by being slightly more heavily armed than an aircraft carrier and shooting down three full-size enemy helicopters.

See, cigarettes really are bad for your health, especially when they can be used to shoot people. In real life, the recoil would tear your jaw off, so we'll fi le this under the more far-fetched of the Bond gadgets, along with…

This is just silly. A car that turns invisible? Think about it, though: this feature could be a must-have if it had any basis in reality, allowing BMW drivers to avoid abuse from white-van men at the lights and anyone in a Renault Twizy to retain their dignity.

“Now, if you'll just stop thinking about sex with floozies for a moment and pay attention, 007, this looks like an ordinary plaster cast. Your foe will think you're injured and so lower his guard. Then, when he least expects it, the cast swings round and slaps him hard in the face. We find it's especially useful for terminating SPECTRE agents at sporting events, bus stops and other venues where you will be sitting next to them.” So that's useful then.

Moore's Bond uses everyone's favourite Cornetto sales ship on a massive airbag to rise from the canals of historic Venice and pootle through St Mark's Square, while a very cheap special effect is used to imply that a pigeon is doing a double-take at his hovercraft-based shenanigans. Moonraker? More like “Barrel-scraper”.

The scarily lesbotic, decidedly hard-faced Rosa Klebb is the wearer of this deadly shoe with retractable toe-knife. The “Swiss-army shoe” from The Naked Gun mocked it, but it's so ridiculous as to be almost immune to parody. Klebb attacks Bond with it, but he hits her with a chair, and then saucy spy Tatiana Romanova shoots her. Because, as the old saying goes, the gun is mightier than the shoe.

Is there anything this watch can't do? Its bezel spins, turning it into a tiny saw! It works as a magnet, purloining M's spoon, and helps undo zips on dresses! Yet like most Bond gadgets, it really comes in handy just in the nick of time; as he's being lowered into a shark tank, Bond cuts the rope and swings to safety, and equilibrium is restored in the Bond universe.