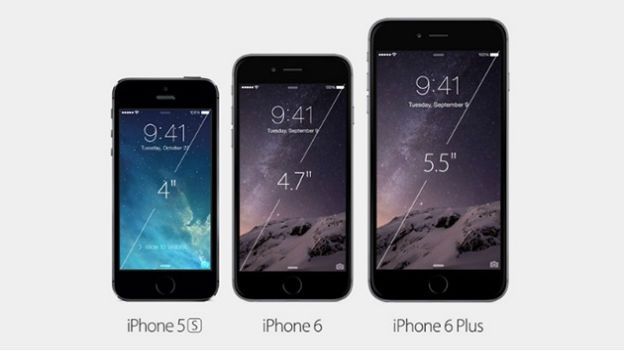 It may have passed you by, but apparently Apple has announced a new supersized phone? We stacked it up against the current fat-phone champ to see who's boss...

Samsung has stuck with the same size screen as the Note 3, that's 5.7-inches if it had slipped your mind, but that doesn't mean everything is the same. Oh no. Instead of using a 1080p panel, Samsung has plumped for a Quad-HD Super AMOLED screen, with a seriously impressive 500ppi.

Up close video playback and images look impressively sharp with good contrast and rich colours that'll make this a good option for entertainment and gaming as well as work.

The adaptive display means the screen should hold visibility well in a good range of light conditions although we only got to see it in action under the glare of some Berlin conference room lights.

And it clocks in at 5.5-inches, with a pixel density of 401dpi, which is clearly an improvement on the old generation of Retina Displays, but still isn't quite reaching the singing pixel density of Samsungs highly acclaimed Super AMOLED screens.

Another nice change for the Galaxy Note 4 is the addition of an aluminium band, which wraps around the side of the phone. No longer do we have to suffer with that metal 'look' style of the Note 3. The rear is still a textured leather look, though the fake stitching from the Note 3 has been stripped away, leaving a much simpler look.

The iPhone 6 Plus is a very similar build to it's smaller cousin, although it's a tad thicker at 7.1mm, compared to 6.9mm for the iPhone 6. The edges are far more rounded than the iPhone 5s and the Galaxy Note 4, so it's a lot softer in the hand, though it has a simple metal back rather than the textured leather of the Note.

The main change for the iPhone as previously stated is the size. Even the smaller iPhone 6 moves up to 4.7 inches now, with the 5.5 inch iPhone 6 Plus now entering the realm of the Note.

We were massive fans of the 16-meg shooter on the Note 3 and it's no surprise really that the Korean company has stuck with the MP count for the 2014 model.

That doesn't mean everything is the same though. For one, Smart Optical Image Stabilisation has been added, ensuring your snaps are less blurry and even sharper when the sun goes down.

Moving to the front and there's an improved 3.7MP wide angle selfie camera complete with a special Wide Selfie Mode, for when you're trying to jam in as many people as possible. Another clever update is that you can use the heart rate monitor on the back as a makeshift camera shutter button.

The 6 Plus also features selfie-smarts, with enhanced face detection and light adjustment to help you take perfect selfies.

Specs wise, we're looking at an 8MP iSight camera, with True Tone flash, 1.5-micron pixels and f/2.2 aperture, along with a brand new sensor. There's a new feature called Focus Pixels - as the lens moves in and out, it can handle continuous autofocus, and tell if the focused object is in or out of phase. And they've also added local tone mapping and advanced noise reduction to clean up your snaps.

Panoramas can be captured at up to 43MP now too, and the new gyroscope makes mapping and stitching your panoramas more accurate than ever before. And as an added bonus, the 6 Plus also gets Optical Image Stabilisation to match the Note 4.

The Samsung Galaxy Note 4 has a Qualcomm Snapdragon 805 CPU inside, which was extremely spritely when we played with it at IFA. As with any phone released by Samsung, you know it's going to have a whole host of extra goodies. Well, the Note 4 has truly outdone itself.

There's a host of UX and interface tweaks, bringing it much more inline with the Galaxy S5 in terms of software, as well as improvements for Multi-Window, which now lets you size them any way you want.

Three new microphones allow an enhanced voice recording app to pick out particular parts of the conversation and a special interview mode uses noise cancelling tech to dial down into just the voices you want to hear. A big improvement over the Note 3.

Fitness fanatics will appreciate the heart rate monitor positioned under the camera, while the companion app S-Health has been updated with all the extra features from the Galaxy S5.

Now, another massive area of change this year is in the famed S-Pen stylus. Everything from pressure sensitivity to handwriting recognition has been improved, making text input more accurate. You can even use the S-Pen like a computer mouse for selecting multiple items at once. Handy.

The new A8 chip is 50 times faster than that in the original iPhone. It's 13% smaller than the A7, and 25% faster. and 50% more energy efficient, meaning it can sustain high-intensity performance (like gaming) for longer.

Speaking of gaming, a new focus on mobile gaming has the likes of Epic, Ubisoft, Gameloft, EA and Disney on board to make powerful new games for the next-generation iPhone.

Apple also has an eye on health, and the new M8 co-processor is at the heart of that - it can measure all your movement and elevation changes wherever you go. Nike is working on a brand new version of the Nike+ app for iOS 8 that will take full advantage of that. The Apple Watch provides more data, including heart rate and

And brand new landscape features come to the 6 Plus as well. Flip your phone horizontal, and the display effectively splits into two panels, letting you swipe windows to the bottom to minimize, or pull them back up to full screen.

The Note 4 uses microUSB 2.0, and adds some new fast charging tech that'll take you from 0% to 50% charge in around 30 minutes (it took about an hour with the Note 3).

The Note 4 packs a 3220mAh battery and now features the ultra power saving mode that we first saw in the Samsung Galaxy S5, giving you the option to pair back your Note to all but the very basic functions to extend its battery life.

Added to that there's new fast charging, that claims to give you up to 50 per cent battery inside 30 minutes – that's allegedly 30 per cent quicker than the charge time we've seen on previous devices.

Apple reckon that you'll get 24 hours of 3G talk time out of the, along with 16 days standby and 14 hours of video. It still charges via lightning cable, and Apple promises that the battery life issues that plagued the iPhone 5 and 5s are gone, thanks to super-efficient A8 processor and larger battery.

Stay tuned for an in-depth look at the battery when we get our hands on one.

We still think the Note range is too big to use as an everyday phone - if that's what you're looking for this probably isn't for you. But with a range of clever new tricks, the Note 4 shows that Samsung is continuing to blaze a trail for palm-sized productivity devices. The Note range is certainly on the right track, and the 4 only takes things further.

Meanwhile, Apple has obviously noticed that the 'phablet' model has worked, particularly in the Far East and parts of Europe and Asia. The 5.5-inch 6 Plus is an obvious reaction to that and while it notably omits to include a stylus (Jobs never believed in the stylus after all...) it looks like it packs the power to compete with Samsung's market leader, with some fresh ideas to boot.

You'll have to hang on for a full review so we can make some more accurate judgements about both, but just as the iPhone and the Galaxy phone ranges have gone head to head for years, this could be the beginning of a new Apple vs Samsung battle, over an extra inch worth of screen.