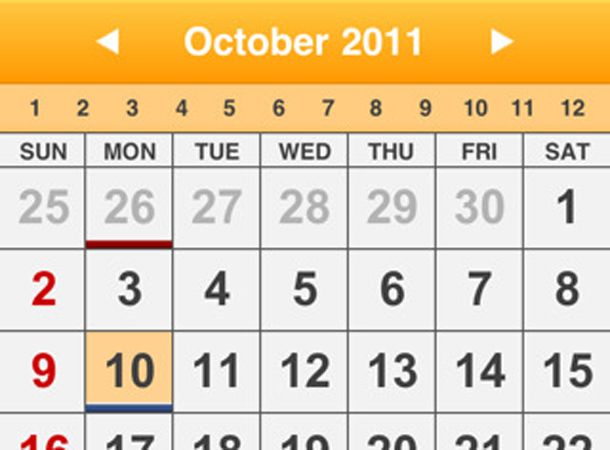 Space year 2011 stretches before you, bursting with gadget experiences and tech to-dos. If you are planning to keep your relationship with tech a 12-month love affair, Here's a dozen things to mark on your new smartphone's calendar…

See below for 12 Things to do in tech this year

Get back in shape post-Xmas with the help of tech. Slim Jim's gym in London offers a free Power Plate session and for those further afield the FitnessBuilder iPhone app (£6) can create a workout tailored to location – home, work, gym, open prison – and specific body parts, from abs to glutes, whatever they are.

Facebook Places has now arrived on Android and BlackBerry as well as iPhone. Pummel friends who are checking-in to the M25 by heading out to the Cricket World Cup, which kicks off with one-day internationals from February 19.

March 17 is St Patrick's day and your annual ticket to Guinness-fuelled wooziness. Keep tabs on your antics with the Alcohol Units Calculator for iPhone (£0.59), which counts up just how far over recommended limits you've gone.

Mothering Sunday is April 3. Make her year with Logitech's laptop-friendly HD Webcam C510 (£41, www.logitech.com) and keep in touch via free video conferencing. Alternatively, splash out on a Google TV-branded Sony Bravia (£TBC), so she can make Skype calls through her set.

May: Buy a new car

The British Motor Show returns to London's Excel in May with all the major players showcasing their new production motors and concepts.

The Apple iPhone 5 should be announced early in June and launch later the same month. If you want to be first in line, head to the new flagship Apple store in London with a sleeping bag.

Captain America The First Avenger gets its UK release on July 22. Celebrate by downloading the character's comic back catalogue on the iPad with the Marvel Comics app (free, comics £1.19 each).

By August, 3D TV should be clawing its way into more UK homes. Sky Sports 3D currently costs no extra for Sky World HD customers. If you're after new hardware, 3DTVDeals.co.uk aggregates the best TV prices from hundreds of reputable UK sellers and has voucher codes too.

International Literacy Day falls on September 8 and Roald Dahl Day on 13: both worthy reasons to get into e-reading. The devices are constantly improving and, more importantly, getting cheaper.

LegoLand Florida opens its plastic gates in October. While you're there, get the kids snapping away on a Lego Digital Camera (£50, iwoot.com).

Next year the series will be back in the hands of Infinity Ward, the masterminds behind the Modern Warfare titles. Whether we get MW3 or something entirely new, you'd best pencil in a few days “personal time” to hammer the solo campaign.

December: Stay at the Bulgari hotel

Bulgari is to open a London branch of its hotel chain in Knightsbridge, offering “contemporary luxury in hospitality”, along with “rare, precious and lavish materials, unique facilities and personalised services.” Go on, treat yourself…

MORE Top HQs of the biggest names in tech